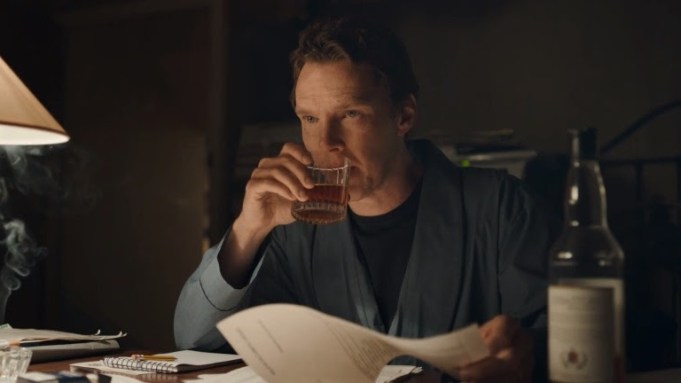 The series will debut on Saturday, May 12 at 9 p.m. ET/PT. Showtime hopes to expand its original scripted offerings on Saturday nights with the five-part series, which is based on the semi-autobiographical Patrick Melrose novels by Edward St. Aubyn.

“As the size of our programming slate continues to grow, it makes sense for Showtime to offer another night of premieres – allowing us the opportunity to eventize series like ‘Patrick Melrose,'” said David Nevins, president and CEO of Showtime Networks Inc. “Offering original content on Saturdays not only enables us to fully service our subscribers with diverse offerings, it gives viewers enough time to enjoy them all. And a series with the ambition and quality of ‘Patrick Melrose’ is the perfect place to start.”

Cumberbatch, who also executive produces, stars as the addiction-prone title character, who struggles to overcome the damage inflicted by a horribly abusive father and the mother who tacitly condoned his behavior. Jennifer Jason Leigh and Hugo Weaving also star as Patrick’s parents. Anna Madeley, Blythe Danner, Allison Williams, Pip Torrens, Jessica Raine, Prasanna Puwanarajah, Holliday Grainger, Indira Varma, and Celia Imrie also star. Each episode, devoted to one of the five novels, is written for television by David Nicholls and directed by Edward Berger. The series is a co-production between Showtime and Sky Atlantic.

Michael Jackson and Rachael Horovitz executive produce along with Cumberbatch and Adam Ackland for SunnyMarch, and Helen Flint for Little Island Productions.