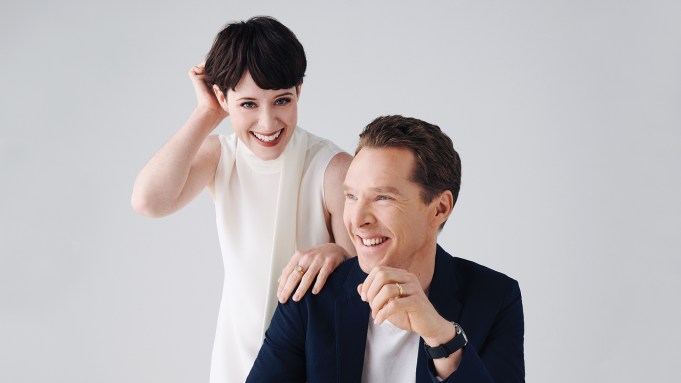 Benedict Cumberbatch (“Patrick Melrose”) and Claire Foy (“The Crown”) sat down for a chat for Variety’s “Actors on Actors” presented by Shutterstock. The full interviews will air in two episodes on PBS SoCal KOCE, the first on Tuesday, June 19 at 7 p.m. and the second on Thursday, June 21 at 7 p.m. Click here for more “Actors on Actors.”

Benedict Cumberbatch: Did “The Crown” choose you, or did you choose “The Crown” — or was it a bit of both?

Claire Foy: I was five months pregnant. I’d just done “Wolf Hall” and gone, “OK, I can have a baby now.” I just was like, “If this is the end of my career, then I’m happy.” I was really happy to be pregnant and just loved not working and loved the idea of eons of time ahead of me where I’d be bringing up my child.

Foy: And then you get an invitation to go and meet Stephen Daldry, who I just think is extraordinary. I went in with that sort of impression of going, one, this is ridiculous I’m in a room with these people. But two, in what world are they going to give a pregnant woman the role of the Queen of England? My nose had started to spread, and I was quite sweaty a lot of the time. Also, just because it’s one of those jobs where — I don’t know if you do this, but I definitely do it — where I think in my head, “I know all these incredible people who [could play this part].”

Cumberbatch: Always. You feel this sense of guilt like, “Are you sure you’ve got this right? I mean, there’s literally five people I know who would cut off their right hand to do it, and who would be much better, in my opinion.” All the time. It’s like you know how lucky you are when it works out for you. That’s another key motivator for me — just to sort of prove people’s trust or faith in me. I just go, “Right. Well, they’ve made this choice. I’ve really, really got to fulfill.”

Foy: But it was different, wasn’t it, with “Patrick Melrose,” because you were at the very, very, very beginning of it, weren’t you?

Cumberbatch: I was. The books had been out for a while. I’d come to them quite late by word of mouth, and immediately was like, “This is extraordinary material.” It’s some of the most beautiful, stunning prose of the 21st century, in the vein of Evelyn Waugh and Wodehouse. It’s got that incredible ease about it and wit. In a line, you get the whole picture of a character. It just holds you. There are these amazing laugh-out-loud moments, but also this trauma at the center of it. This man who’s abused by his father from the age of 5 onwards.

Foy: Knowing you as an actor and having worked with you, I can see that you put so much of yourself into the role and that so much of it was about you being free. I saw you make choices and do things that I could see that you in your head were going, “Oh, I’ll do that now.” There’s one incredible scene where you take about 400 different types of drugs. They all have their own different personality in your body. It’s the most exquisite thing I’ve ever seen.

Cumberbatch: I want to ask you about the exquisite craft on display in “The Crown.” You’ve created a huge amount of empathy, enigma, vulnerability, humor, and with so little. It is a master class in restraint, but, my God, it’s all going on. Your physicality, the way you hold yourself, the tension in your hands, the shift of the skirt in a seat, the power play, but also being completely cut off at the knees, whether it’s by Philip’s behavior or a courtier or an unexpected challenge. It’s a real marvel.

Foy: The thing about Peter Morgan, who’s the writer of it, is that he watches you, knows you’re getting comfortable and then gives you an incredibly emotional scene. He knows that the choices you have are restricted, and he wants to see you struggle with that.

Cumberbatch: Was that going on in the first [season] or was that very much more markedly there in the second?

Foy: It was going on in the first, but I think the second was very personal. For me, anyway, it felt very much about their marriage. Her world was so small. She became so kind of cut off. I felt it was quite relentless in the culmination of her emotionally unraveling really but having nowhere to go.

Cumberbatch: It was a real pressure cooker to watch as well. It was such relief at the end: that compact, that love returning, that understanding of what’s gone on has gone on, but the love is still there. Which I thought is just heartbreaking.