‘The Bachelor: Vietnam’ Contestants Ditch Bachelor for Each Other 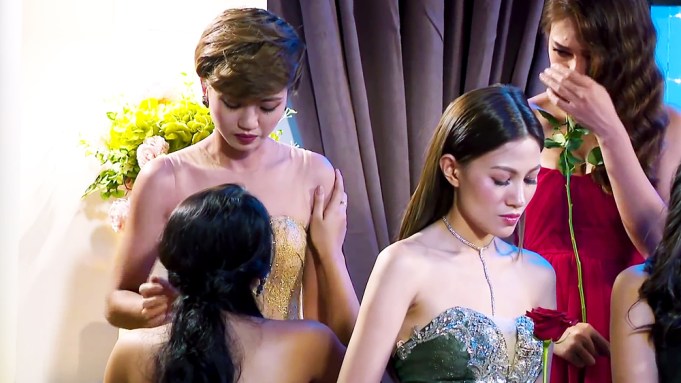 The bachelor wasn’t the only person to find love on the Vietnamese version of the popular reality show.

During a shocking rose ceremony, two “Bachelor: Vietnam” contestants, Minh Thu and Truc Nhu, decided to leave the show for each other, rather than continue competing for a relationship with bachelor Nguyen Quoc Trung.

“I went into this competition to find love, but I’ve found that love for myself. It isn’t you; it’s someone else,” Thu said before turning to fellow contestant Nhu, in tears.

As the two embraced, Thu asked Nhu to leave the show with her. “Come home with me,” she repeated until Nhu stepped down from the steps, agreeing to go. Nhu then turned to Trung to make her decision official.

“I want to ask you, if you decided this, would you feel regretful?” Trung said, according to a Youtube video with English subtitles, while pleading with her to stay. “This doesn’t change my decision. I’m not going to give this rose to anyone else. You only get one chance in this life, and you need to take it. Only you and not anyone else.”

“I’m sorry. I really want to get to know you because you’re someone who made me feel special, and I haven’t felt that way in a long time,” Nhu said.

But it wasn’t enough to keep her from handing back her rose.

However, the contestants’ relationship appears to be short-lived. According to a screenshot obtained by NextShark, Nhu can be seen embracing Trung after re-accepting his invitation to stay.

“After talking to Trung, I’ve changed my mind to accept this rose and continue this journey,” she said.