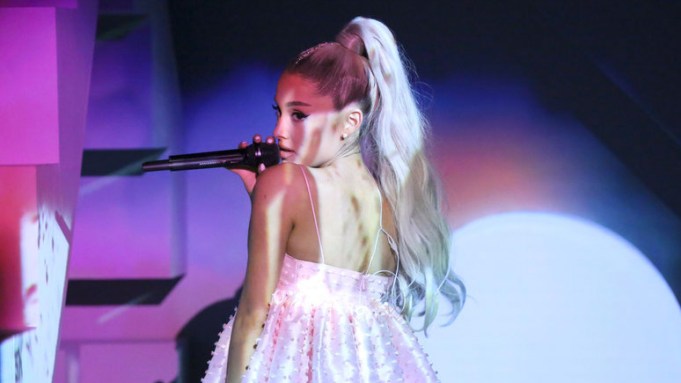 Ariana Grande stopped by “The Tonight Show Starring Jimmy Fallon” Tuesday night to give the debut television performance of her new single “No Tears Left to Cry” and announce tracks from her upcoming fourth album titled “Sweetener.”

Grande revealed the album title to the late-night talk show host and explained the meaning. “It’s kind of about bringing light to a situation or to someone’s life or somebody else who brings light to your life or sweetening the situation,” Grande said. She added that she is working with producers Pharrell Williams, Max Martin, Ilya, and Savan Kotecha on the record, which is due out this summer.

The pop star wasn’t done giving her fans details about her new music. She confirmed the new album will feature a song called “R.E.M.” after tweeting lyrics from the track last week. “There is another song called ‘The Light Is Coming’ that I love a lot and then there’s one called ‘God Is A Woman’ that I love.” Grande said her grandmother, who she calls Nonna, has heard her new music and already enjoys “God Is A Woman.”

Grande explained to Fallon that she will be “doing something special on every 20th” up until her album release, which she let slip will occur three times. Fans are expecting Grande to drop “Sweetener” on July 20.

A song called “Raindrops,” which Grande said is a small part from a ‘50s song called “An Angel Cried,” will open the “Sweetener.” After recording the song, Grande discovered that her “grandfather’s best friend who I grew up hanging out with in Boca, Charlie Calello, wrote it with Bob Gaudio from The Four Seasons.”

It was the most-socialed episode of any late-night series this year by a wide margin, the closest being 2 million for “Jimmy Kimmel Live” on Jan. 4, according to Nielsen Social.

Those numbers and Grande’s recent single landing at No. 3 on the Billboard’s Hop 100 Chart prove that her fans certainly missed her.

Watch Grande’s performance below and the full interview above.