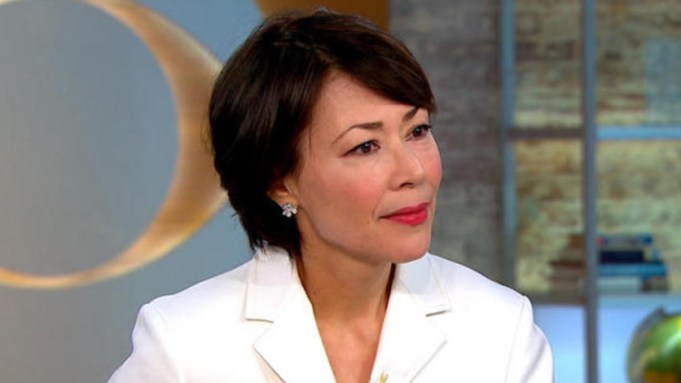 Courtesy of CBS This Morning

In her first TV interview since leaving NBC News in 2015, Ann Curry said a “climate of verbal harassment” existed at the “Today” show.

Curry spoke about the #MeToo movement on “CBS This Morning,” during in interview with co-anchors Norah O’Donnell, Gayle King, and John Dickerson. The former “Today” co-anchor, who worked alongside Matt Lauer for over a decade, made a point to speak up against the “power imbalance” in workplaces across the nation.

“I think it’s in general, overdue,” Curry said about the global conversation surrounding sexual harassment. “We clearly are waking up to a reality and injustice that has been occurring for sometime, and I think it will continue to occur until the glass ceiling is finally broken. This is about power and power imbalance where women are not valued … I’m talking about people in the workplace who are abusing that power … the fact that we are moving against this imbalance of power is absolutely overdue.”

When asked about the sexual harassment claims made against Lauer, Curry said she was “not surprised by the allegations,” many of which were first reported in Variety. When asked directly if “verbal sexual harassment” was “pervasive” at NBC News, Curry confirmed, saying, “It was. Yes, period.”

“Because you’re asking me a very direct questions, I can say I would be surprised if many women did not understand that there was a climate of verbal harassment that existed,” Curry explained. “I think it would be surprising if someone said that they didn’t see that.”

When the “CBS This Morning” trio also asked Curry if Lauer was responsible for her ouster from “Today,” Curry said, “You should ask someone else about that, I’m not the one to ask.”

“I’ve really at this point let it go,” the veteran news anchor added. “It’s been years, and I want to really move on from that.”

Curry — who was on the morning show to discuss her upcoming PBS series, “We’ll Meet Again” — was coy, saying, “I don’t want to cause more pain” for others, explaining that she herself has been subject to public humiliation, referring to her infamous final day on “Today” when she cried on national TV.

“I think that the real question, in my view, is what are we going to do with all of that anger? It’s about the problem that’s pervasive across industries,” Curry said. “I don’t know a single women who has not endured some form of sexual harassment, and many women who have endured workplace sexual harassment. It’s happened to me in multiple jobs, and it is a way of sidelining women. It’s ultimately not only bad for the women, but it’s bad for the company, and bad for our nation … we should be talking about the victims.”

As for “Today’s” new female duo of Hoda Kotb and Savannah Guthrie, Curry showed her support for having two women at the desk. “As you well know, many of the viewers of the morning broadcast are women,” she said. “The idea that women are involved, speaking to women is overdue. I absolutely think it’s a good idea.”