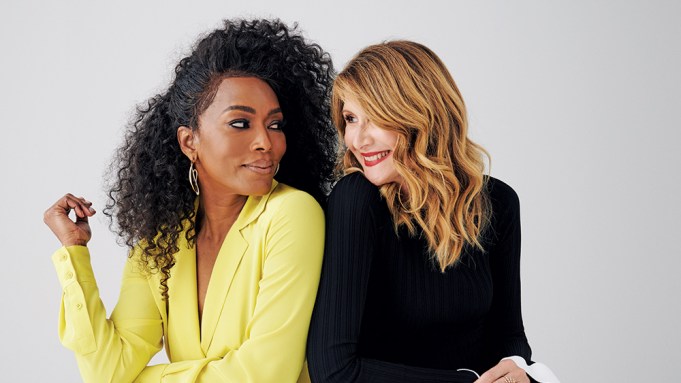 Angela Bassett (“9-1-1”) and Laura Dern (“The Tale) sat down for a chat for Variety’s “Actors on Actors” presented by Shutterstock. The full interviews will air in two episodes on PBS SoCal KOCE, the first on Tuesday, June 19 at 7 p.m. and the second on Thursday, June 21 at 7 p.m. Click here for more “Actors on Actors.”

Laura Dern: You’re such a genius and so prolific at doing so many kinds of roles. What was it about playing this character on “9-1-1” that made you want to commit to something that could be long-term?

Angela Bassett: For so long, I think I resisted the idea of doing a show that may go seven years or more. Because just the nature of this business, I love how you get to change and grow and put on different characters and ideas and suits and interact with different people and directors and actors and situations and locations. The idea of staying put isn’t one that I’ve embraced, but as you mature, you try to find roles and situations that are interesting. This was one.

The idea of being a cop and the complicated relationship she has with her husband — he was coming out of the closet and how that was going to affect their family dynamic — all of that was really compelling. It was like, “OK, without a script, I’m ready to jump off the ledge with faith. There’s a net and it will be all right.”

Dern: It’s amazing that once you’re in it, you realize this narrative we’ve been telling ourselves as actors, that on a film we’re going to have so much more freedom to be in the gray and the complication of character. But then once you do it, you realize that with the time you get to discover on any given day, how incredibly different or how complicated we are as human beings.

Bassett: Exactly. There are a lot of times in films that once you’ve completed the three months, you see it and think, “Aw. Had I known …” I just have to release it and say, “All that I know now, up to this point, I give it. I give it all.”

Dern: It’s heartbreaking when the last day of the shoot is when you have this great discovery about who this person is, and that is what’s amazing about television — having that kind of time and working with someone like Ryan Murphy.

Bassett: Yes, yes. How do you choose your roles? When I think of you, I think of just a fearlessness and an authenticity. What’s your process?

Dern: I’m sure it’s the same as you, that sometimes it’s that filmmaker or that showrunner that makes us feel like they’ll always catch our fall, that they’re there for us, so we want to hurl ourselves into their vision. If we’re lucky, that is also connected to a character that makes us go to a place we’ve never gone. I always think about the amazing good fortune of being a woman now in the world and watching how determined we are in our growth everywhere around us, how demanding we are of the level of authenticity and respect and transparency we expect in the world. So playing characters that don’t know their own value has always interested me; that is a theme I keep inside my head a lot because it can be a very powerful corporate executive or a broken homeless girl, but both of them don’t necessarily trust their worth. That’s just a really interesting thing to think about for women and as women.

Bassett: Can you recall any moment in your own career that has been particularly challenging?

Dern: On this movie, “The Tale,” I was playing my director [Jennifer Fox], and that was a radical and amazing, very unique challenge. She wrote and directed a piece that is more about how we retell ourselves the story of our lives in order to survive. She had been sexually assaulted as a 13-year-old. I think she really protected herself in order to survive it by telling herself that it was in its own way this story of a first love. It was only years later that she was able to see what it really was, which obviously was abuse and deep trauma. But she needed to be the owner and the narrator of her own story, and I understand that. To be sitting with her at the camera as we’re retelling this story …

Dern: It was amazing. It was so bizarre and difficult. To have to be fierce with your director when you have strong opinions about your character or what’s working for you emotionally while it’s their life; it was complicated. Common plays my lover, her now-partner. Luckily she gave us lots of room to improvise what a love story looks like when a writer who’s a survivor of sexual abuse [is writing about] how their adult intimate relationship is defined.

Bassett: That was a very nice relationship between the two of you, I think. He’s wonderful. But I think you know when you just connect with someone onstage. I think you brought out the best in each other. I think that must be something very special about you on a set.

Dern: Well, I don’t know. One day, that’s what I want, to find that with each other.