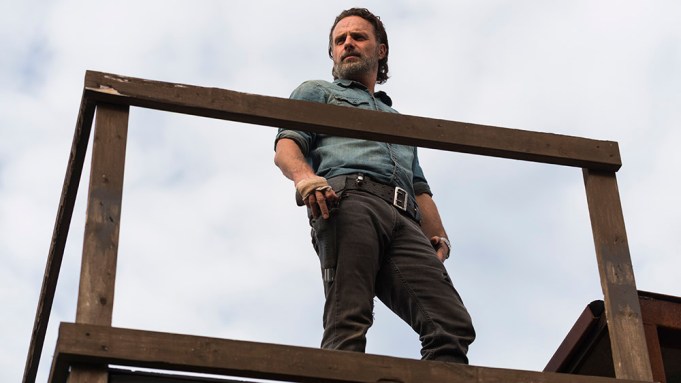 Andrew Lincoln’s almost 10-year run as Rick Grimes on AMC’s “The Walking Dead” will officially come to a close during the show’s ninth season premiering this fall.

After confirming the news during the show’s panel in Hall H at this year’s San Diego Comic-Con, Lincoln told EW Radio he’s looking to spend more time with his wife and two children. He said the show’s Georgia-centric shooting locations make it difficult for him to see his family, which lives in England.

“I have two young children, and I live in a different country, and they become less portable as they get older,” Lincoln said. “It was that simple. It was time for me to come home.”

Lincoln has played “The Walking Dead’s” lead character every season since the show’s first episode, “Days Gone Bye,” premiered on Halloween night in 2010. At Variety’s Comic-Con studio, co-star Jeffrey Dean Morgan described Lincoln as “the leader” of the cast.

Norman Reedus described him as the cast’s “quarterback,” and detailed their production process with Lincoln.

“He’s the first call I get when I wake up. He calls me, we talk about the day as we’re driving to work, we get to work, talk about the day, at lunch he’s in my trailer, and then we wrap and he calls me on the way home. It’s been like that every day,” Reedus said.

The bond between Lincoln and the cast was apparent when the actor received a standing ovation following his Comic-Con announcement.

“I love this show. It means everything to me. I love the people who make this show,” Lincoln said.

“The Walking Dead” Season 9 will feature Lincoln reprising his role as Rick Grimes one final time. The season premieres on Oct. 7.