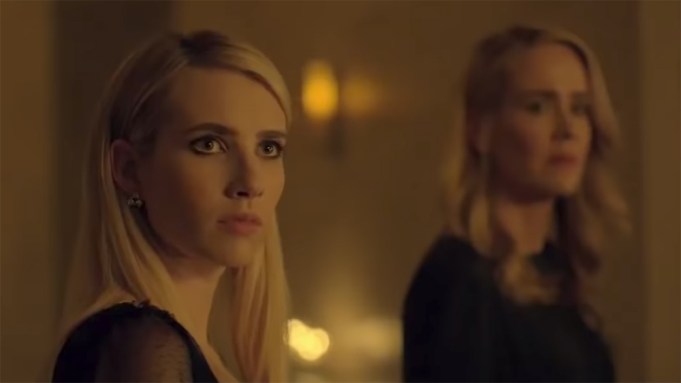 All your favorite “American Horror Story” characters are returning in the newest season, “Apocalypse.”

The video opens with an ominous message — “No need for the news anymore, the chaos has won” — as hordes of pedestrians sprint between cars in typical, apocalyptic form. Soon after, Eichner and “Cult” co-star Leslie Grossman appear on screen before Grossman takes off on a doomed plane ride alongside other “Horror Story” veterans Lourd and Evans Peters and series newcomer Joan Collins.

The rest of the trailer focuses on the resulting effects of a nuclear apocalypse, providing a first glance at Sarah Paulson’s new character in action. Alongside “Murder House’s” Billie Dean Howard and “Coven’s” Cordelia Foxx, Paulson will also play Venable, a mysterious woman who manages a safe house amidst the nuclear devastation. The character was first teased in a short teaser clip that showed Paulson pulling names out of a bingo spinner.

The trailer is also full of callbacks to the show’s first and third seasons, including an appearance from “Murder House’s” rubber man villain, who crawls ominously on the ceiling above two unsuspecting victims, and several “Coven” returns including Emma Roberts.

Closing out the video is an appearance by the antichrist, himself played by “Horror Story” newcomer Cody Fern, who asks Kathy Bates “What do you think?” Her response? “Hail Satan.”