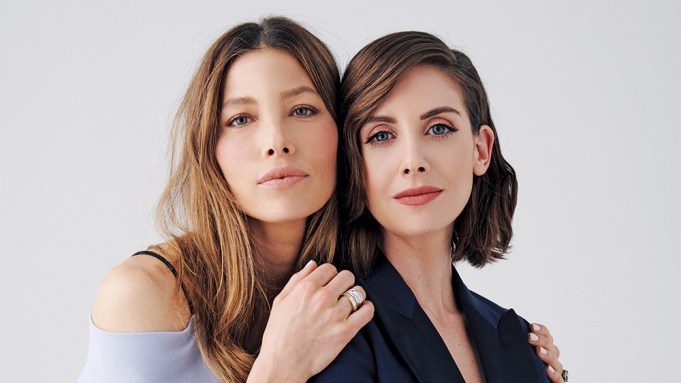 Alison Brie (“GLOW”) and Jessica Biel (“The Sinner”) sat down for a chat for Variety’s “Actors on Actors” presented by Shutterstock. The full interviews will air in two episodes on PBS SoCal KOCE, the first on Tuesday, June 19 at 7 p.m. and the second on Thursday, June 21 at 7 p.m. Click here for more “Actors on Actors.”

Alison Brie: I feel like “GLOW” and “The Sinner” are polar-opposite shows. Because our show is very positive and light and we’re screaming at the top of our lungs and we have glitter all over our faces, and you just had to be gutted every day.

Jessica Biel: That’s true. There were a lot of snot and facial fluids coming out.

Brie: The snot keeps it very realistic, I find.

Biel: It was a real natural, authentic element to the whole thing. But let’s get serious. What you’re doing on “GLOW,” this is no joke here. Physically and emotionally, because comedy stems from tragedy, right? And from a real sense of truth.

Brie: Absolutely. I feel like that’s what drew me to the “GLOW” script immediately. In the pilot episode there’s so much going on for this character. You catch her down on her luck in a really low point in her life, and then there’s this amazing twist and this horrible betrayal of her friend, which was totally intriguing to me. I only got to read one episode before signing on to do the whole show, but it had everything in one episode. There were amazing comedic moments, dramatic moments, a relationship between two women that was very compelling … and then wrestling.

Biel: Our two characters, they both kind of do a crazy thing in the first episode. A little bit on different scales and in different ways, but still, you have to follow your character, you have to make her likable.

Brie: It’s a real journey to win the audience back over after the initial episode. And you’re right, it’s interesting watching “The Sinner” because it’s so intense that even as a viewer, you’re like, “How am I going to feel about this woman?” And that’s what makes these characters so exciting to play. I feel like I love that people love to hate Ruth, or just are not sure how they feel about her.

Biel: Ruth is quite a villain on some levels. Cora is, for sure. But any villain doesn’t believe that they are the villain. You really believe that “I must take over the world,” or “God has told me to do something.”

Brie: Do you feel like there are more great roles for women now? I’m very spoiled getting to work on “GLOW,” so I know my perspective is “Every show now is just 14 women!” I know that that’s not fully the case. But I do think [“GLOW’s”] Jenji Kohan, as a producer, is making great strides and casting a wide breadth of types of women — different shapes and sizes, different races, different ages, and giving them all fleshed-out characters. Letting them play real people with a variety of emotions, not stereotypes.

Biel: On “GLOW,” the fact that you’re in the ring, wrestling, and that it’s about showing women’s bodies in a really different way, … using your body in a way that is inherently very appealing and sexy, but it’s not an objectifying situation — you are saying, “Look at me. Hear me roar. I’m going to take you down.” That must be so intense for all of you.

Brie: It’s the most fun job I’ve ever had. That’s what’s great about having women bosses. The first thing that they told everyone is “We want you to be able to do your own wrestling. But we don’t want you to change your bodies. We want all different body types represented on this show. We cast you. We like you for who you are.” It really was a different way of thinking about my body as a woman in this industry, coming from years of thinking, “I have to be really skinny to get a part. I have to be really sexually appealing for men to want to cast me.”

Biel: What freedom, honestly! Because I feel like I’ve done many jobs where there was a physical element to it, and it wasn’t like someone said to me, “You have to lose weight.” But I think women, we hear that a lot.

Brie: And I would also argue that, even if no one’s saying it to you specifically, you just know. There are pressures that have been put on women for a long time, and I think they’re starting to change as people are looking at beauty in a different way. Feels like there’s a wave that has been building. I almost think it takes the edge off even the competition of it all, because women have come together in such a way in this last year.

Biel: I really did used to feel that a little bit. Like we were all against each other, and now it feels like we’re all arms around each other going, “Try it.”

Brie: Totally. Come at me, bro!