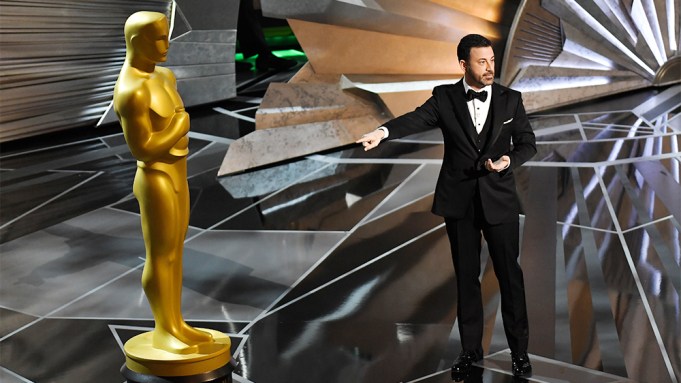 Days after the 90th Academy Awards telecast aired in March to record-low viewership, Disney-ABC Television Group executives met with leaders of the Academy of Motion Picture Arts and Sciences to convey a message:

You are facing irrelevance.

Other awards shows, such as the Primetime Emmys and Grammys, have also faced recent ratings declines, but none nearly so steep.

Disney-ABC executives had for years pressed the Academy to impose changes that would shorten the Oscar telecast and incorporate more widely recognized films. (The 2018 Oscars clocked in at an unwieldy 3 hours, 53 minutes; the nine best-picture nominees this year averaged $78.7 million at the U.S. box office.) But at the come-to-Jesus meeting after March’s show, the TV people walked through the lousy ratings at a granular level, identifying precise moments during the show that prompted viewers to stop watching. They made several recommendations about the ways that the telecast’s length could be reined in, and proposed a “best blockbuster” category that would reward films that had been seen by larger audiences. They also argued that viewers had become fatigued by the ever-increasing number of televised awards shows — including the Golden Globe Awards, whose viewership has been relatively stable in recent years — and that the Oscars should be moved to an early calendar period.

Academy officials acknowledged that the ratings situation was dire. At a meeting several weeks ago, AMPAS board members discussed the changes proposed and pushed for by ABC. On Tuesday night, the board voted to move the Oscars up to Feb. 9, 2020; to cap the telecast length at three hours by moving several awards categories into commercial breaks; and to create a “popular film” category, the criteria for which has not yet been divulged.

ABC has not commented on the changes. But sources at the network expressed relief Wednesday that the Academy had finally taken action. The Oscars telecast is the biggest piece of event programming for the Alphabet — the only one of the Big Four broadcasters without an NFL package, and thus lacking the boost that its competitors get from television’s most powerful driver of live viewing. Network insiders were also unmoved Wednesday by evident social-media backlash to the announcement, particularly to the addition of the popular film category, noting that changes to longstanding institutions such as the Oscars often yield complaints, and predicting that audiences would ultimately embrace the new format.

The Oscar changes came just two days after the Big Four and the Television Academy announced a new deal for telecast rights to the annual Primetime Emmy Awards. The networks and the TV Academy had wrangled over similar issues, with broadcasters pushing to move several Emmy categories out of the telecast. Both sides agreed to effectively punt on proposed telecast changes, however, and revisit them in 2019.

With a new format locked in, the Academy is expected to next turn to naming producers and a host for the 2019 Oscars. Sources told Variety on Wednesday that no conversations have taken place with Michael De Luca and Jennifer Todd, who produced the last two telecasts, or with Jimmy Kimmel, who hosted the last two years.