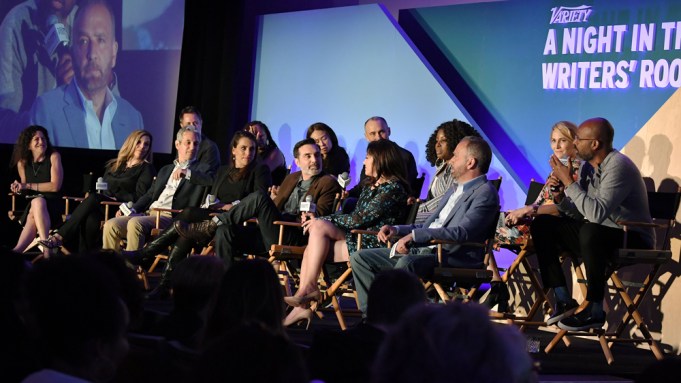 Parity was the hot topic on everyone’s mind during the drama panel discussion for Variety’s “A Night in the Writers’ Room.”

Before the conversation between seven female and six male writers began, Variety’s executive editor of TV, Debra Birnbaum, brought out a stuffed elephant toy to address the “elephant in the room” of changing the lineup to the night’s panelists.

“We fixed this mistake thanks to all of you. What it proves is that this is an ongoing conversation we need to have and one we’re very happy to continue tonight,” she said.

Easterseals Disability Film Challenge founder and actor Nic Novicki also took to the stage pre-discussion to challenge the room of writers and power players at the Jeremy Hotel in West Hollywood on Thursday to write one character with a disability in this next season of programming. “Think about it — where are the people with disabilities in your favorite films and TV shows other than ‘Game of Thrones?'”

Suggestions to do so included hiring someone with a disability to join the writers’ room and writing characters where their disability is not necessarily the defining factor of their identity. “It could be primary or secondary, and it doesn’t have to be all about the disability.”

In reference to representations of disability on TV, “The Good Doctor” showrunner David Shore later shared how “the show I’m on is all about that,” so having “differently abled” people on his writing staff was a no-brainer.

In terms of gender parity, Matthew B. Roberts, executive producer and writer on “Outlander,” said “over the last two seasons, the writers’ room has been 80% women. At this moment, I’m the only male writer on the show.”

“The Chi” showrunner Ayanna Floyd Davis noted that “my room is all black,” while “The Americans” co-showrunner Joel Fields reflected on how “our room had age diversity. We had writers in their early 20s and a writer in their late 60s.”

But in providing more inclusive writers’ rooms, “Black Lightning” showrunner Salim Akil urged that, “diversity is not diversity for the sake of filling quotas,” he said. “We’re not doing anyone any favors when we talk about the idea of inclusion. It’s good business.”

Krista Vernoff, “Grey’s Anatomy” co-showrunner, described how during her blind-reads of scripts when staffing writers for the TGIT drama at this time last year, she explicitly insisted that the pile of samples only come from people of color. “I called all the agencies with three jobs to fill and told them I didn’t want them to send me scripts from white people. We already had so many on-staff,” she said. “If you control the pile to be inclusive, it radically impacts your staff and radically changes the town.”

“Supergirl” co-showrunner Jessica Queller revealed Thursday evening that the CW series is about to introduce its first transgender female character. “I’ve worked on the CW for most of my career, and this is something that you couldn’t have imagined even five years ago. I think the whole climate is changing in a positive way,” she said.

Akil chimed in, praising how women and minorities are becoming less of a genre in and of themselves. “We used to be a genre. I remember when I was looking for a job, the response was: ‘He’s only directed black shows.’ It was like: ‘Well, f—. It’s not like I was directing dolphins. I was directing human beings with storylines.”

Writer-producer of “The Assassination of Gianni Versace: American Crime Story” Maggie Cohn was glad her experience on the FX anthology series “gave me the opportunity to work on a show I think normally would have been staffed predominantly by men. I had the opportunity to work on a show with male characters and a male point of view and have my femaleness not be a problem, which I think is important moving forward, that women are not relegated to working on shows just about women, female problems, and mothers.”

Fields also explained how every writer on the staff of “The Americans” touched every script. “Our process was to take passes together. We never handed over a script and said: ‘Oh, this is a woman’s scene. Please write this scene.’ We’re writing about human beings.”

“UnReal” co-creator Sarah Gertrude Shapiro described her frustration at times with being the only queer person on set and people thinking that she is the resident expert on the subject. “I often get asked: ‘Does this offend you? A lot of times, it’s like: ‘F— yes. Don’t talk about lesbians and golf.’ For the woman of color in our writers’ room, in a s—ty way, she was singled out to answer questions like that for herself, too.”

Sarah Gertrude Shapiro and #TheChi's Ayanna Floyd Davis talk being the only queer person or person of color in a #WritersRoom https://t.co/O5WVHpOcUA pic.twitter.com/cTb7KQAcER

But Floyd Davis offered that being there to answer those questions is important, too. “In many shows I’ve been on, I’ve been the only black person in the room,” she said. “I was glad to be there to offer that perspective, but it’s the way you do it and how inclusive you are with that writer in other parts of the process. It’s what I’m there for. I’ll tell you what s— is wrong. I want to say that.”

“The Deuce” executive producer George Pelecanos emphasized the necessity of opening up opportunity, especially when hiring new staffers. “When I interview somebody — I’ll be the first to admit. If two people are equally qualified, I’m going to hire someone who is a minority or a woman because you’ve got to make a correction.”

Yet in terms of managing staff, certainly talent, when they are already hired and are “throwing furniture,” as Vernoff relayed, “we have to stop the enabling of abuse on set across the board.” She may have claimed that “all the crazies on ‘Grey’s’ are gone and it’s a great place to work now,” but knowing when to shut down the set and tell everyone to go home to inhibit further abuse of power is another area the industry needs to take a look at. “For every abusive actor, there are about 400 enablers,” she said.

Akil acknowledged, however, that “black actors are just so happy to be working now that they’re trying so hard to play it cool. It’s a different experience because they haven’t been working.”

Despite some actors viewing this time as the “Golden Age of Television,” with “Atlanta,” “Black Lightning,” “Claws, “The Chi,” and “Luke Cage” airing right now, Akil admitted that “when I look at contracts, there are African-American and Hispanic actor pay gaps, where people are settling for pay they normally shouldn’t have to, only because they don’t want to make a fuss and want to work.”

The panel concluded with a generally universal acknowledgment to reject reboots and focus on new ideas — save “Northern Exposure” and “Frank’s Place.”