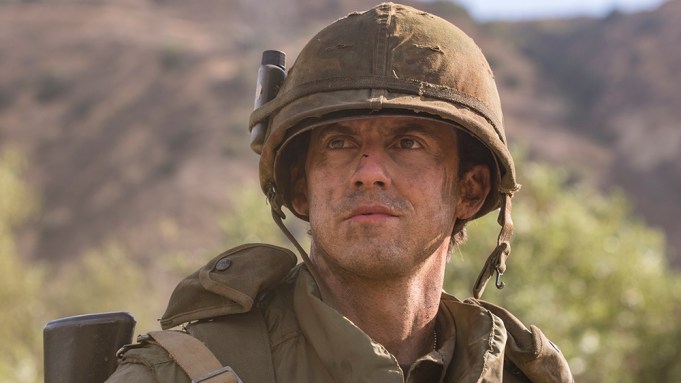 SPOILER ALERT: Do not read if you have not yet watched “Vietnam,” the fourth episode of the third season of “This Is Us.”

A little more of the mystery of who Jack Pearson (Milo Ventimiglia) was has been unraveled on “This Is Us.”

The family man who told his wife Rebecca (Mandy Moore) he was “only a mechanic” in the Vietnam War not only actually saw a lot of action while overseas but he also enlisted, despite a heart condition that would have legitimately kept him home, because his little brother Nicky (Michael Angarano) was drafted.

“He’s a guy who, if you break it down, he’s of an unhappy home, he’s not clearly well-loved by his parents — even when they’re loving him, it’s not done correctly. From a very young age he’s got one thing he loves and cares about and that’s his brother, and so of course there’s going to be a moment he’s going to protect him with everything he has,” series creator Dan Fogelman tells Variety. “Jack was always built to be a father, but as a young man he had this little brother who he was fathering.”

Fogelman says he always knew they’d want to visit Jack’s past in Vietnam in the third season, and the fourth episode, aptly titled “Vietnam,” was just the start. “We have a direct pickup coming a couple of episodes later,” he shares.

In order to more accurately portray the experiences of war, Fogelman and his team enlisted veteran and author Tim O’Brien as a consultant, put the troop he cast through boot camp and also sent a crew to Ho Chi Minh City to shoot landscapes they could lay as plates over footage of actors including Ventimiliga and Angarano shot more locally, in Lake Piru, Calif. (Later in the season, full scenes will be shot in Ho Chi Minh City, for the timeline in which Jack’s son Kevin visits to learn more about his father’s time in war.)

O’Brien, who was drafted into the Vietnam War as Nicky was, has been pleasantly surprised by just how realistic “This Is Us” has been able to portray the experiences of firefights, as well as the feeling of “dread” so many of the soldiers have.

“You’d think you’d be afraid of dying, but you were afraid of your reputation being sullied, am I brave enough, can I stand up under fire? And the alternative is guys lost it, and you’d almost be insane if you didn’t lose it,” O’Brien says.

O’Brien notes that for a character like Nicky, who is a medic in the war, the pressure is intense because he’s “putting his hands in blood every day and losing people.” He notes that medics in the war had very little in the way of defense, and the best they hoped for was getting the wounded helicoptered out.

“There wasn’t much you could really do. And watching people die and die on you day after day and lose feet and legs, you could expect how a guy could lose it,” he says.

When “This Is Us” first introduces Nicky in the war, he has already been there for just over a year and is “Article 15,” which denotes “unbecoming conduct.”

“He’s not a great solider,” Angarano admits. “Jack is sort of obviously an outstanding soldier, and I don’t think Nicky cares to be and just isn’t by his DNA. And so that for me is interesting, but also the dynamic between him and Jack where you’re so used to seeing Jack formulate a plan and save people and the fact that Nicky recognizes that amongst themselves, it shows that he’s such an observer.”

Jack’s plan was at first to follow his brother to war, even if he couldn’t be anywhere near him, but as luck would have it, he ended up on an assignment “less than 20 clicks” from where Nicky was, which gave him opportunity to chopper over and visit. And the Nicky he encountered was quite different from the one he remembered from youth.

“The words that were used to describe Nicky when you first see him were ‘gaunt,’ and the script said that he was high on something, and you don’t know really what it is — it could be anything, it’s everything,” Angarano says. “And for me, that was physically important — understanding that he is literally a shell of himself.”

Ventimiglia acknowledges that Jack put himself in a “very, very dangerous place” by enlisting, but he believes he did it because “Nicky was his touchstone” and with Nicky gone, his rough home life was that much harder.

In order to more fully “feel the weight” of what men like O’Brien went through, Ventimiglia and Angarano looked up their own birthdays on the draft drawing to see if they would have had to fight. Both of them would have.

Ventimiglia admits that the biggest challenge for him with “Vietnam” was figuring out who Jack was in his earlier days.

“Vietnam” only scratched the surface of Jack and Nicky’s experiences in the war. Instead, it continuously flashed back through their lives to show their bond and how they found themselves both fighting overseas.

“The experience of their childhood is what defined their relationship, just as it defines Kevin and Kate as twins and Randall…as it relates to the Big Three siblings,” Fogelman says.

When it comes to Nicky, Fogelman notes that “there is a lot of Jack in this guy, but he is also very different because Jack is his older brother.” While Jack fought so hard not to become his father or his mother, Fogelman says Nicky “may be more apt to fall prey to that.”

The idea of telling the story backwards through time was interesting to Fogelman because the audience already knows how the story ends — with Nicky dying in the war and their father blaming Jack for not protecting him. He wanted to follow their common structure of playing with time to show “how the sins of our fathers and all of the other small moments and incidents, and even the sins of the birth date, created a whole story.”

Another quintessential “This Is Us” moment received the origin story treatment in “Vietnam” when Robinson (Mo McRae), wounded in action and about to be sent out of Vietnam earlier than expected, took the sides of Jack’s face in his hands and told him to “breathe.”

While Fogelman credits Ventimiglia for starting that runner in the series overall, because it was “something [he] started doing with the kids, and I was like, ‘Oh, that moves me,'” he wanted to show that Jack actually picked it up from someone he cared about.

“It’s something I think we all do in life when somebody you admire [does something] and a a moment clicks into your brain that you kind of adopt as a behavior,” he says.