‘This Is Us’ Team Talks Season 3 Origin Story for Jack and Rebecca, Rougher Road for Randall and Beth 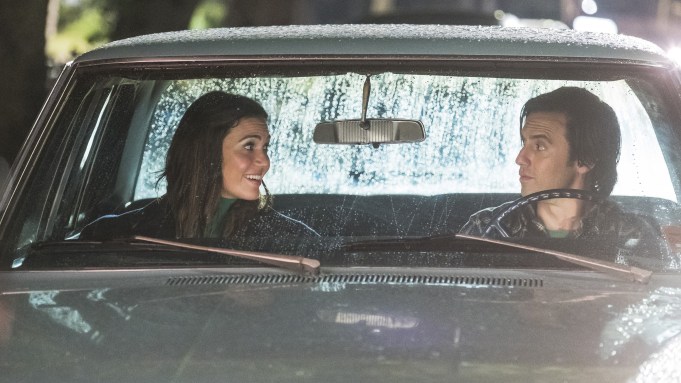 SPOILER ALERT: Do not read if you have not yet watched “Nine Bucks,” the third season premiere of “This Is Us.”

The third season premiere of “This Is Us” offered another glimpse at the future lives of Randall (Sterling K. Brown) and Tess (Iantha Richardson) and revealed what future Toby (Chris Sullivan) looks like — notably in a Kate-less bed — but it did not answer the question of who the “her” they were visiting was.

Fogelman shared that what is important in the show is “how you get there,” not the destination itself, but he did promise they wouldn’t “string [the answer] out over seven seasons or anything like that.”

“Time creates the twist in your life,” he said, noting that Kate not being in the scene could mean they’d broken up, that something had befallen her or that she simply was in another room.

Instead, the premiere dove much deeper into the origin of Jack (Milo Ventimiglia) and Rebecca’s (Mandy Moore) love story. And surprisingly, they did not start off on the best foot: he took her to a carnival with only the titular “nine bucks” in his pocket where the pair got caught in the rain and learned they have fundamental differences when it comes to dogs versus cats and go-to pizza toppings. But even bigger than that, it turned out Rebecca had another man in her life — and he showed up on her doorstep the morning after her ill-fated first date with Jack, just as he was returning with flowers of his own.

Moore shared that the key thing for the couple is that their “connection was always palpable and always there,” and told Variety that she loved that their first date didn’t go according to a presumed plan.

“It was just awkward, and maybe people assumed the natural trajectory of these two undeniably meant for each other individuals would have the most swooning romantic date of all time,” Moore said. “But it obviously wasn’t too terrible [because] she left her jacket. She recognized this wasn’t something she could just throw away.”

Fogelman pointed out that the third episode of the season will feature their early connection in a big way — one that reminded him of “Demi Moore and Patrick Swayze doing pottery in ‘Ghost.'”

On the flip side, though, Fogelman said Randall and Beth (Susan Kelechi Watson) won’t have smooth sailing all season. “Randall’s plotline in this season will go in a surprising direction,” he said. “We go deeper into the season with Randall and Beth. Clearly this is an unbelievable marriage and they have a great thing that jumps off the screen but [we’re] also putting them through their paces.”

“Randall always sort of struggles with where he belongs in society, especially when dealing with the African-American community, and in his experience with Deja he finds himself dealing with the black community with greater frequency,” Brown said. “He hits a few stumbling blocks where he wants to be of service to his community but it’s almost as if it’s not wanted because people don’t view him as being a part of it. So it’s almost like when is he too black or when is he not black enough? Deja sort of opens it up in him.”

With Beth telling Kevin that Zoe is a man-eater, it looks like he won’t have an easy season either, even before he decides to visit Vietnam to learn more about his father’s past.

“He honestly needs to be doing other things to take care of himself, but he meets this girl and he’s falling for her, and we’ll see how that plays out in his recovery and his health moving forward,” Hartley said, noting that at the end of the second season he was “doing well for the first time in his life..and feeling comfortable in his skin.”

When asked who might have the hardest time this season, Brown said simply, “Toby goes through some stuff.” Deciding to dump his anti-depressants to aid his and Kate’s (Chrissy Metz) chances of getting pregnant, Toby will fall back into a depression for at least part of the season.

“I think we’ve all experienced depressed moments, and I think that’s the dirty secret,” Sullivan said. “Depression and things like that have been so stigmatized that nobody wants to talk about them and many [people] want to pretend like it’s never happened to them. And hopefully this storyline will be a conversation starter and allow people to connect on a different level.”

The changes to Toby’s usually outgoing nature will start to come pretty quickly in the coming episodes, Sullivan shared. But while the audience will notice subtle behaviors he is seeding into his performance, the character around him may not be so keen. “It is the simplest thing in the world and the hardest thing in the world and ask them how they’re doing — and really mean it,” he said.

This adds a challenge to Kate’s relationship with Toby, because while she “has to stay mentally and physically and emotionally healthy if she wants to have IVF work,” Metz noted, “how will she put herself first if Toby is going through something?”

Given only a 10% chance of success with IVF, Metz said Kate is still so determined to have a biological child in part because she wants to push past the “something else she can’t do” after spending so much time feeling like she isn’t good enough because of her weight or because her singing career hasn’t taken off. But she also wants “to have Jack live on in some respect,” she added. “And I also think it’s sort of a living amends to her mom and she wants to be a mom that not that she wishes Rebecca was but to understand that Rebecca had a lot on her plate. She’ll understand [that] being a mom herself.”

While the entire Pearson clan has a lot going on in the present day storyline, Fogelman admitted there is also still a lot to mine in their past.

“Next week we go into the period post-Jack’s death so we’re with the teenagers … and we’ll live a lot in that period, too: How does the family pick themselves back up?” he said.

Moore added that it will be about four months after Jack’s death, and Rebecca has not only had to pick herself back up but also keep the family together. “Everybody grieves in different ways and different stages, and I think trying to keep a rein on [the kids] and keep them in check while wallowing in [her] own grief and figuring out how to come up for air is tricky for her,” she said.