Margaret Atwood: We’re Living in ‘Both the Best and Worst of Times for Women’ 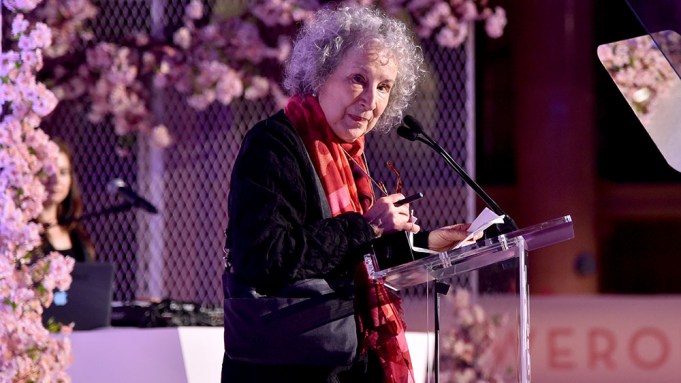 Margaret Atwood commented on the state of women’s rights and what the success of “The Handmaid’s Tale” says about the world at Variety‘s Power of Women luncheon.

Atwood, being Canadian herself, joked to the audience that Americans could find “a nice hot cup of tea and a mattress in the church basement” in their neighbor to the north should they feel compelled to flee from the current political state. But she added that Canadians have been impressed by the way Americans have “mobilized and pushed back.”

“I know when the election first happened, there were a lot of young people in tears because this had never happened to them before,” she said. “They had never seen things go backward in this way before. But the way Americans across the country have pulled themselves together on many different fronts, not just women but those extremely impressive students who are working for better, fairer gun laws.”

She compared the current state for women to the one she grew up in, noting that, though progress has been made, there is still a fight to be had.

“How different the world is today than during my adolescence in the ’50s when, if you were a powerful, professional woman, you’re either a bitch or a freak,” she said. “How interesting it would be if no one saw the need to have a special event for women because women had become simply an accepted and equal part of society.”

“But we are very far from that moment,” she continued. “Right now, it is both the best of times and the worst of times for women… We have not seen such a blatant pushback against women for a very long time. Some women are fighting for rights they’ve never had, but others are fighting the threat of removal of such rights. Now is not the time to take anything for granted.”

She went on to talk about Hulu’s “The Handmaid’s Tale,” and how, after Trump won the election, the dystopian drama “was no longer a story about something that couldn’t happen. It had become a story already in process. That is why the iconic red costume with the red hat has become an immediately recognizable protest symbol around the world. It’s a little too real.”

She ended on an optimistic note, however. She pointed out that at the end of “The Handmaid’s Tale” book, it’s revealed that the repressive regime in its world did eventually end, and she hopes to see the same result in real life.

The author was introduced by Ronan Farrow, and also said in her speech that there should be a monument dedicated to journalists who have died in the name of exposing corruption.

Atwood was recognized by Variety for her support for AfterMeToo, a movement working to end workplace sexual violence.