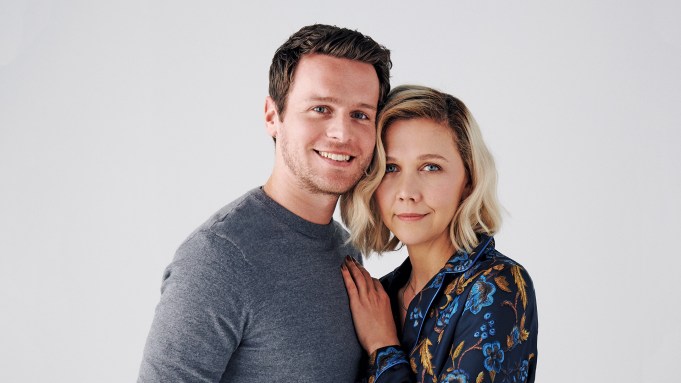 Jonathan Groff: In the credits, one of the things that jumped out to me is it says, “Producer: Maggie Gyllenhaal.” As an actor, is that something you always wanted to do?

Maggie Gyllenhaal: It’s something I want to do very much. Some of that was born out of making “The Deuce” and playing Candy because she’s a filmmaker, but she’s also a producer. I had never signed on to a project where I didn’t have the script. I was being asked to play a sex worker, and I was like, “I don’t know how to commit to this without some guarantee that I’m going to be part of the conversation,” which has become more and more important to me as I’ve gotten deeper into my life and my work. I think it may have been originally just a nod to me to make me feel comfortable doing it, but it became a real actual collaboration where I’ve learned so much about the whole process. I’ve always imagined David Fincher as somebody where you do have to relinquish control, where of course it’s going to work best if you as an artist have a point of view and have a full sense of who you are, but that ultimately if he says, “Stand here because the shaft of light is coming in the window here,” you have to stand there. So what was that like for you?

Groff: I did an Ang Lee film called “Taking Woodstock,” and that was another filmmaker where I just went: “I know who you are. I’ve heard the stories. I’ve seen all the films. I’m clay. Mold me. I want to be in your world.” With David, it was a similar thing where when you sign that contract where it could be one year, it could be seven years, you’re sort of signing over your life. But he has this disarming way. He’s so intelligent and charming. So I was like, “Yes, whatever you want,” and to me the process of doing the show was showing up and wanting to achieve his vision.

Gyllenhaal: Did he ever come up to you and give you a note where you were like, “I just actually played that,” or “That’s exactly what I’m trying not to do”?

Gyllenhaal: Wow. I really am envious of that.

Groff: It’s also a mind-set. My innate kind of quality as an actor is I’ll usually jump first before I think about it. The thing you said to me a couple weeks ago when we were talking about having a secret on set was really a revelation to me about coming to set as an actor with something that’s just for you, that only you know you’re playing, and you find a way to work it into what’s happening. Is there something with Candy in the first season that you were holding on to that was private to yourself?

Gyllenhaal: It’s not so much that I think you have to have a secret, because that could be kind of a heavy job to come up with: “What’s my secret for the day?” But it’s more like I look at the scene, and I try to make space in my mind to see what reverberates about the scene with me. I see younger actresses sometimes come into a rehearsal and just tell the director every single thing that’s on their mind, and I’m like, “No, don’t do that.”

Groff: I imagine that this job, “The Deuce,” had its challenges. Is there a challenging moment that you can remember in your vast career that you overcame?

Gyllenhaal: In general, I’ve gotten better about listening a little more, seeing other people’s points of view as collaborating artists. I made a movie this summer with a director who I adore, and she and I sometimes disagreed, but it was with the utmost respect. It flowed both ways. That is the kind of collaboration I’m interested in having. That’s how you can get through difficult things, when there is respect. How about you? Have you had a challenging situation that you got through?

Groff: I think when I started acting, it was a form of escapism where it was a safe place to go where I could be emotional and be angry, and it was almost like a compartmentalization. Part of that, too, is coming out of the closet, which was a big deal for me when I was 23. I think we’re talking about a similar thing: being able to express your personal opinion in the work but also just showing up on a set as yourself and feeling comfortable enough, warts and all, fears and all, to be who you are. It’s a challenge to, on a daily basis, bring yourself to your work in an authentic way.