J.K. Simmons, Edie Falco Reflect on When They Stopped Having to Wait Tables 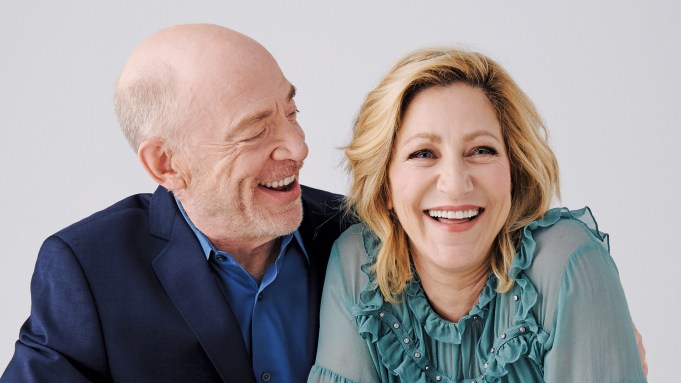 J.K. Simmons (“Counterpart”) and Edie Falco (“Law & Order True Crime: The Menendez Murders”) sat down for a chat for Variety’s “Actors on Actors” presented by Shutterstock. The full interviews will air in two episodes on PBS SoCal KOCE, the first on Tuesday, June 19 at 7 p.m. and the second on Thursday, June 21 at 7 p.m. Click here for more “Actors on Actors.”

Edie Falco: What interested you in the role in “Counterpart”? And what scared you?

J.K. Simmons: I was first interested just reading the script, and then on about page 20 I started getting scared. The first 20 pages is just about this guy Howard who’s kind of a sad sack and a lowly cog in this weird sort of Fritz Lang monolithic government bureaucracy. And then the big reveal is, oh, by the way, there’s a parallel universe, and there are two versions of this guy. When that moment happened on page 20, I had a visceral, physical reaction sitting in my chair. I was completely blown away, which unfortunately is a moment that audiences didn’t get to experience because you have to market the show.

Falco: Do you shoot all of one guy and then all of the other guy? Or are you bouncing back and forth as you’re shooting?

Simmons: In the first season, there was a lot of bouncing back and forth episodically as well. So I’m shooting not only both guys in the same day but Episode 1, and then Episode 8, and then Episode 4. It was kind of like shooting a 10-hour feature, in a way, which is good news and bad news. And you’re doing something that I have very limited experience with, and that is playing a real person, and particularly a person who most people have a memory of. So there’s a challenge.

Falco: That was a nerve-racking part of taking on this job, that I knew this was a story people knew, and I knew people knew who this woman was, Leslie Abramson. Playing a real person is a whole other challenge. How much work are you going to put into actually sounding like and looking like this other person? And how much is just about who she was in the scheme of this story?

Simmons: You never met her, spoke to her.

Falco: The [producers] approached her; she gave us the big heave-ho. I think it was kind of a big deal in her life that she was not all that interested in revisiting. So she wasn’t a part of it, which actually took the onus off me a little bit. So I was allowed to, based on her words, her testimonies and all that stuff, have a fair amount of it be my imagination. That was a huge relief.

Simmons: What’s the role that changed everything for you?

Falco: I think, from an external place, doing “Sopranos,” just because so many people saw it. It changes who you are in this industry. People start to recognize you, which starts to have a leverage of its own when it comes to getting further work, and the lucky part is that it happened to have been something I was very proud of. You can’t always count on those two things being hand in hand, so I was very grateful for that. How about you?

Simmons: There are a lot, I think. And maybe the most obvious one is the recent one, “Whiplash,” which changed the perception of me more than I felt it changed anything. Because I’m 60 years old. I was very grateful that that kind of attention hadn’t come to me when I was twentysomething, because God knows I would’ve done a James Dean or something.

Falco: When we met on “Oz,” that was kind of the end of not having to wait tables, really for both of us, in between gigs. It was like, [acting] can actually carry me.

Simmons: I haven’t waited tables in like a year. [Laughs.]

Falco: I always have my eyes out at the Help Wanted signs. That still doesn’t go away. I’ll walk past a restaurant and be like, “That’s a pretty busy lunch crowd. I could keep my eye on this place.” It’s just so cellular for an actor in New York.

Simmons: That’s the beauty of it to me too — what we are fortunate to be able to do for a living is the variety. There’s always something new. And as much as I’ve loved a lot of the things that I’ve done, some of which have a lot of visibility, I can’t think of anything I’d want to go back and revisit either. I just want to keep moving forward. Like a shark.

Falco: And it’s lovely, also, to be getting older as that’s happening. The stories I am telling are that of a different generation now, and there’s never a dearth of stories to be told about people as they move through their life.

Simmons: So just to clarify, a woman in Hollywood just said, “It’s lovely to be getting older.” That’s a beautiful thing.

Falco: What choice do I have?