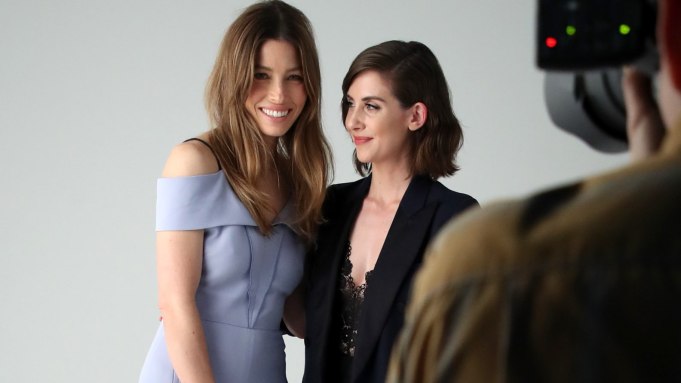 In the last few years, Jessica Biel and Alison Brie agree that Hollywood is changing.

During this year’s Variety “Actors on Actors,” presented by Shutterstock, the two actresses sat down to discuss how they’ve seen the entertainment industry change recently, partly due to the #MeToo and Time’s Up movements, and where there is still room for improvement.

Brie, who stars on Netflix’s female wrestling hit “Glow,” said the culture on her show is something she’s never experienced before, with female showrunners, directors, and other women behind the scenes.

“The first thing that they told everyone is ‘We want you to be able to do your own wrestling. It’s very important to the show, we want you guys to be able to do your own moves, but we don’t want you to change your bodies. We want all different body types represented on this show, we cast you, we like you for who you are,'” Brie explained. “It really was a different way of thinking about my body as a woman in this industry, coming from years of thinking ‘I have to be really skinny to get a part, I have to be really sexually appealing for men to want to cast me,’ and this felt much more geared toward strength, and it really changed the way I was working out and I was training.”

The two stars continued to discuss the industry’s pressures to look a certain way, which “The Sinner’s” Biel thinks has really evolved since she started acting as a teenager.

“I really do feel, like you’re saying, body types, all cultures, women all over the world, you can make shows and you can tell stories, on television specifically, and somebody wants to finance that and they want to tell the story,” she said. “It is exciting, and I feel this energy.”

Brie pointed out how women in Hollywood have really come together and supported one another over the last year, to which Biel replied there used to be a feeling that “We shouldn’t all be in this room together and oh we can’t talk to each other because you guys are up for the same role, so oh, watch out, this kind of thing. And I really did used to feel that a little bit, like we were all against each other.”

Now though, she said “it feels like we’re all arms around each other going ‘Uh, try it. Please.’ Because we’re all here shoulder to shoulder wanting to put each other to work, and that’s what’s really cool. All these showrunners and women behind the scenes and behind the cameras, we’re hiring each other and it’s so great.”

Brie also addressed the controversy surrounding women being paid less than their male co-stars, which she admitted, ‘In the past, to me, I would never talk about that with other actresses or other actors or even with my agent, it would be like ‘Well, whatever you think I deserve.’ It’s such a hard thing to discuss, people hate talking about money, and I do think as actresses we’ve been made to isolate ourselves and think that women are the enemy and it’s just not true.”

Both agreed they hadn’t had those conversations about pay in the past, and just assumed they were making less than their male co-stars.

Going forward, Biel said, “We have to feel that our community supports us and as we’re putting out the best work we can and the best intention we can into our work and into whatever it is we’re doing in our communities, that it’s being reciprocated. And if it’s not being reciprocated, then how do we feel that confidence and that power to say ‘You know what, I’m not comfortable not getting paid as much as he’s getting paid and I’ll step away from this project,’ or whatever it is? And I think it’s taken a long time for the community to help push us up and say that and I feel that’s changing now too.”

The Emmy Award-winning series “Actors on Actors” will air in two episodes on PBS SoCal KOCE, the first on Tuesday, June 19 at 7 p.m. and the second on Thursday, June 21 at 7 p.m. Both episodes will stream on pbssocal.org following their premieres.