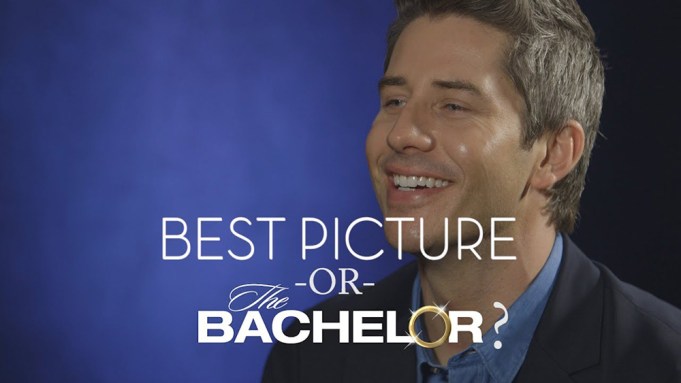 The Oscars may be over, but “The Bachelor” still has one episode remaining to determine Arie Luyendyk Jr.’s romantic fate. On Monday night, in part one of a two-night finale, the Bachelor proposed to Becca only to end their engagement weeks later to pursue a relationship with runner-up Lauren.

In honor of both awards season and Bachelor season coming to a close, Variety sat down with Luyendyk for a game of “The Bachelor” or best picture, where he had to decide where a memorable quote was from. Turns out the Bachelor may not be the biggest movie buff, as he struggled to recognize quotes from “Forrest Gump,” “Rocky,” and “Silence of the Lambs.”

“You total slut, you have a crush on him. You’re defending him, you love him, you wanna have, like, ten thousand of his babies,” a line from “American Beauty,” Luyendyk guessed was from “Mean Girls.” He laughed at his mistake, admitting, “I just saw this bag flying through the air in New York, I thought about that movie too.”

The game also included lines from “Bachelor” staples Corinne Olympios, Nick Viall, and Chad Johnson, along with a quote from Chelsea, one of the women who competed for his heart this season. One of Olympios’ most famous lines, “my heart is gold but my vagine is platinum,” he immediately recognized.

Luyendyk, though, struggled to identify things he himself had said on camera, and when he didn’t remember saying, “Every time I think I’m going to get one I don’t,” he responded, “I said that? Oh God that’s too funny.”

The second part of “The Bachelor” finale airs Tuesday at 8 p.m. ET/PT on ABC.