Sarah Paulson on Directing for ‘American Horror Story’: ‘I Don’t Try to Shed My Own Instincts’ 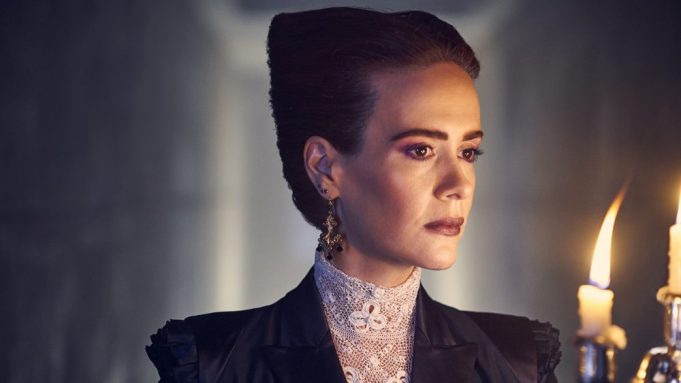 SPOILER ALERT: Do not read if you have not yet watched “Return to Murder House,” the sixth episode of “American Horror Story: Apocalypse.”

Sarah Paulson has been a staple of Ryan Murphy’s “American Horror Story” universe since its first season, so it may only seem fitting that the first time she stepped behind the camera to direct an episode was with the “Return to Murder House” episode of “Apocalypse,” the eighth installment of the anthology series. But it wasn’t the first episode she was asked to direct.

“[Ryan] asked me to direct an episode of ‘Feud’ because he knew I would love working with all of those actors in a story about actors,” Paulson tells Variety.

While Paulson admits the idea did “really speak” to her, the timing just wasn’t right — she was about to shoot “Ocean’s 8” and didn’t feel she’d have the proper prep time to “read every book about those ladies that I can get my hands on and be as well-versed in it as I could be.”

“I’m a gal who likes to be prepared, so I wanted it to be in a world that I felt I knew very well,” she says, noting that “American Horror Story” became the perfect place to dive into directing. “Because I’ve been on the show for so long, I do understand both the visual style and the emotional stakes of what goes on in the scenes.”

But before Paulson was handed the keys to the Murder House episode, Paulson says Murphy first asked her to direct the eighth episode. It wasn’t until about a week before “Return to Murder House” was supposed to start filming that he told her he changed his mind. Although Paulson admits she didn’t feel ready at first, she pushed through concerns in every instance where Murphy had come to her with an opportunity before, it was the right choice for her to step into it. So she continued the pattern.

“I thought, ‘Don’t let your fear of failure stand in your way. It’s never worked for you before to shy away from something because you’re afraid,'” she says. “So I just thought I better heed his call.”

In order to shake off some of the fear, Paulson took a nine-hour course at the DGA that all first-time directors are now asked to take, listening to speakers like Lesli Linka Glatter, Dan Attias and Paris Barclay.

She also re-watched the “Murder House” season of “American Horror Story” to study the visual style — despite not liking to watch herself on-screen. Her goal was to create “immediate visual recognition” for the audience once planting them back in that world.

“Certain rules of the show became clear,” she says. For example: “Every time you’re in Ben’s office, you always see the ceiling.”

While she wanted to keep certain imagery consistent, she also wanted to put her own stamp on it, too. “One of the things that Dan Attias said was ‘You have to bring you. You have to bring yourself to this story. You have to bring that forward,'” she says. “And that is the same way I approach acting — I don’t try to shed my own instincts, I try to listen to them and be responsive to them, and so I thought, why would it be any different from a directing standpoint?”

One way that became important to do this was through the way she shot Cody Fern as Michael Langdon, who in this part of the story was “just a kid and loved his grandma and was compelled to do some things that sometimes surprised him.”

“There’s that moment when the satanists come to the house, and he’s in his pajamas, essentially, and it was not scripted that he be in his boxers and a tee-shirt, but I wanted him to seem like a boy. I wanted the juxtaposition of, ‘Remember, he’s not at the end of this road yet. He hasn’t become even what we as an audience has already come to learn about Michael prior to this episode,'” Paulson explains. “I thought it was interesting to lean into [that] he’s just a boy. … I didn’t want him to have an enormous amount of certainty; I wanted him to be discovering it, too.”

Although this was only the sixth episode of the season, which means there is a lot more story to tell, she did want to provide some closure. That’s why she had Madison (Emma Roberts) flick her wrist at the Murder House gate so the doors swung shut.

“It was not in the script,” she says. “That was something that I added when we were shooting because in the beginning they open the outside gate with magic, and I wanted them to close it, leaving Violet and Tate there.”

The hardest part for Paulson, though, was the sheer volume of scenes she was tasked with shooting: 72 scenes in all.

“The one that we shot prior to episode six was 28 scenes, if that gives you any idea of the volume and responsibility,” she says.

Some of those scenes were character-driven monologues by Jessica Lange and Connie Britton, which Paulson often shot in a variety of close-ups, including dutch angles, to study the emotion on their faces. Others were much shorter shots to more fully flesh out the tale about Michael that the characters were telling — such as Constance (Lange) finding the dead rodents her grandson was leaving her or planting rosebushes over the corpses she buried. And of course there was the moment Paulson herself had to appear on-screen as psychic Billie Dean Howard.

“It was really overwhelming, and I think the only way I was able to do it was to just focus on the day at hand and to try and keep the long view in my side view mirror. I always had the story as periphery, in terms of the thing as a whole, but I could just focus on, ‘What was today’s work?’ Sometimes I think it’s too overwhelming to try and hold the whole thing at every moment of the day — like it would be for any aspect of life,” Paulson says. “But it doesn’t hurt to have Ryan Murphy with a megaphone behind you going, ‘You can do this, you can do this! You have to do this!'”