Megyn Kelly apologized for saying blackface should be OK, but the stench remains. 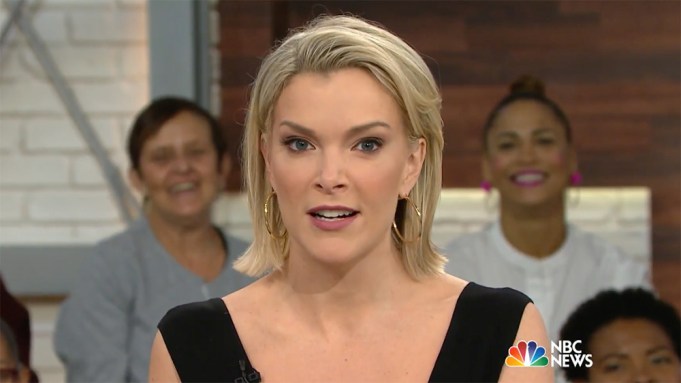 In issuing a defense of blackface Tuesday before contritely apologizing on Wednesday, Megyn Kelly learned her hardest lesson yet about how her current job at NBC differs from her old one at Fox News. And while she sought to clean up her own mess, there remains one question that’s beyond her ken to answer: Just how many more times she’ll be permitted to learn that lesson.

That Kelly crossed a rhetorical line should come as no surprise. After launching her show with the insistence that she no longer wanted to cover political topics at all, Kelly found herself drawn, by some combination of ratings necessity and trollish temperament, towards controversy, sitting as the moderator of a rotating panel she dominates through force of opinion. The blackface conversation — in which Kelly questioned why darkening one’s skin for a Halloween costume is a big deal at all, noting that “back when I was a kid, that was OK” and defending a Diana Ross costume worn by Real Housewife LuAnn De Lesseps — was different in substance from much else Kelly does, but not in tone. A career attorney who pivoted to TV news, Kelly’s style is by now familiar to viewers: A sort of faux-naive request to be educated about facts that she thinks perfectly obvious is a part of her prosecutorial playbook.

Familiar to viewers, too, is Kelly’s refusal to back down; even as members of an all-white panel on Tuesday’s broadcast tried to explain why blackface is offensive, Kelly trundled on. And so those watching at home could hardly be blamed for casting a somewhat spurious eye upon Kelly’s deeply contrite apology at the start of Wednesday’s hour, in which she seemed almost near tears as she explained she had been brought to an understanding of the ills of blackface — a rapid turnaround from someone disinclined to ever modulate an opinion, let alone retract it. “I want to begin with two words: I’m sorry,” she said.

Despite her apology, Kelly seemed not to have absorbed the message as fully as she claimed: She framed the conversation that got her into trouble as having been about “political correctness and Halloween costumes,” deploying a loaded term that kept the focus on whether racially-charged costumes are “politically correct” and not, well, racist. Kelly also noted that she had been OK with, but no longer was, “a black person making their face lighter or a white person making theirs darker” — when the history of costumes that demean and degrade, from Al Jolson to Luann De Lesseps, tends overwhelmingly to push past her false equivalence and flow only in one direction.

Her apology got a standing ovation from her audience, before a panel segment in which black pundits Amy Holmes and Roland Martin were deployed to explain to her at some length why blackface is offensive. Then Kelly was left to the rest of her show, which included a three-segment interview with actor Gary Busey. “Are you having fun?” he shouted at her at one point. “I am now!” she laughed.

Her about-face followed a segment on the marquee “Today” 7 a.m. hour in which Kelly’s colleagues Al Roker and Craig Melvin pushed past Savannah Guthrie’s carefully chosen wording in order to call for a clearer and better public apology than the one Kelly had already sent colleagues. This level of internal rancor was notable: Roker’s tone of frustration as he marveled that Kelly cannot not have known about blackface’s history seemed especially pointed and damning, coming as it does from a long-serving member of the show’s cast famed for being genial and the very opposite of confrontational. It was a stunning rebuke from the “Today” franchise to a star who, only recently, had seemed like an investment worth tens of millions of dollars.

Even throughout the vexed beginning of Kelly’s show — in which, for instance, Kelly ended up in a war of words with guest Jane Fonda about her questions about plastic surgery, and Kelly hamhandedly referred to “Will & Grace” making its viewers gay (which led to Debra Messing saying she regretted going on the show) — the network and its stars stood by and promoted Kelly. She seemed to have recovered each time, but to have learned precisely the wrong lesson: That the attention she gets from ruffling feathers is its own reward. But dust-ups are different from real, meaningful offense, and the end of NBC’s unstinting goodwill may well have come.

How had Kelly ended up here, going from the center of the national discourse as the interlocutor unafraid to bring tough questions to Donald Trump to alienating her colleagues by defending a Real Housewife who wore blackface?

It goes back to the original sin of “Megyn Kelly Today” — that in enticing the ambitious Kelly to their air, NBC offered the host the one format of television least suited to her talents. Kelly is too inherently adversarial an interviewer, too fueled by the desire to simply be oppositional, to handle anything but hot-button political topics, and she has a tendency to provoke in a manner that flatters the self-selecting partisan audience of Fox News but not “Today’s” broader constituency. It’s unclear whether she did or did not think blackface was OK to begin with (the ease with which she reversed her course suggests she never really cared), but only that it had been assigned as a light and fluffy discussion over morning coffee. On Kelly’s time on Fox, arguments were chosen more tactically, in order to generate specific responses in the audience; this likely would not have risen to the level of air, or would have been more carefully scripted in order to keep Kelly from stumbling into endorsing racist minstrelsy.

But on NBC, what Kelly seems to have wanted was to have been a star whose vision defines an hour of broadcast time a day, and that’s exactly what she got. “Megyn Kelly Today” is aptly named — its flailing and failing reflects where an anchor who made her name on speaking her mind is today. And her attempts to reclaim past glories through overreaching for controversy are pushing her show further and further from breaking through with “Today’s” broad but not endlessly patient audience, not to mention with colleagues empowered to criticize her and with talent bookers who seem to have abandoned the show. (While Kelly interviewed Busey, the better-rated “Live with Kelly and Ryan” had Tracey Ullman and Greg Kinnear.) One wonders whether Kelly, who tends to act out most under pressure, will repeat some version of this scandal next Halloween — or whether, by then, NBC will still be providing a platform on which she can speak quite so freely.