The Streaming Era Owes Thanks to ‘House of Cards’ (Column) 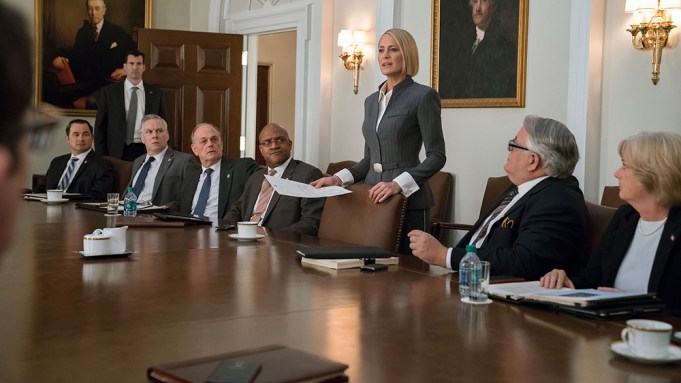 It can be hard to recall that when “House of Cards” launched on Netflix, it was one of a kind.

After all, the sixth and final season of the political drama is to arrive Nov. 2, along with this week’s flood of streaming content, including the Julia Roberts noir “Homecoming” and a new episode of Matthew Weiner’s “The Romanoffs” on Amazon. (Netflix isn’t dropping any other high-profile scripted series that day, but is still releasing plenty of content, including the family educational series “Brainchild” and the  Orson Welles film “The Other Side of the Wind.”)

Crowded Fridays are more common than not in an era during which Netflix, Hulu, and Amazon are increasing the temperature in an overheated marketplace, while linear players like HBO, Showtime, and FX scramble to keep up and future streamers like Apple and Disney are waiting in the wings. Netflix, unbound by concerns like prime-time real-estate (unlike HBO, which traditionally airs two hours of scripted content just one night a week), sets TV’s agenda by producing enough original content to keep any potential subscriber sated. Every other player simply seeks to keep up as best they can.

While “House of Cards” wasn’t Netflix’s first exclusive series — the Norwegian-produced cop dramedy “Lilyhammer” beat it to air by about a year — it was, at the time of its launch in 2013, the first show commissioned by the streaming service. (“Orange Is the New Black” and the revival of “Arrested Development” both followed later in the year, along with little-remembered horror series “Hemlock Grove.”) And, crucially, Netflix’s first original show didn’t just plant a stake in the ground for the streaming service by dint of its novelty. Its every particular set the template for what was to follow.

“House of Cards” was marketed around its A-list talent: Series stars Kevin Spacey and Robin Wright were directed, at least in the show’s first two episodes, by David Fincher. It dropped at a time in which audiences had already been primed to binge TV on Netflix thanks to the streamer’s catalog of past hits obtained from other platforms, and its form, once one got past the starry patina of Fincher’s style and Spacey’s fame, was grungily perfect for hours spent in pajamas. The show was proudly visceral, ever-so-slightly smarter than it needed to be but more bound to the pleasures of plot than the nagging necessities of logic. Viewers didn’t feel like they were learning something, exactly, but the sense that the show was saying something about politics kept guilt at bay as the next episode, and then the next one, played on and unspooled its assortment of dark delights.

And the show’s story, about two people willing to do absolutely anything to consolidate power, both ratcheted up in tension episode after episode and had a comfortable sameness. Even seasons in, with Frank and Claire Underwood’s situations having radically changed, the characters themselves had not, and neither had the contours of each season’s story, with paper-tiger opponents easily overcome. (For the show’s final season, Spacey was written out due to real-world misbehavior, and the perspective shift is welcome and jarring; that for the first time in six years, it is a whole new show brings emphasis to just how smoothly consistent it had been before.) It was the most comfortable sort of suspense, the one in which moments may be tense but the overarching understanding is that our heroes are safe. “House of Cards,” built to be hastily, greedily consumed and to suffer when considered for too long, was a great watching experience for the same reasons it was never a great show.

All of which helped acclimate viewers to streaming TV, which is as much a genre with its own particular, relatively new traditions as it is a format defined by platform. It’s hardly the only show to have done so; “Orange Is the New Black,” with its narrative floridity and hairpin shifts deep into divergent characters’ backstories, similarly made its case as something that was a fundamentally different experience from a weekly TV series. But “House of Cards,” as it ends, can’t help but feel epochal. When it began, it was effectively the first phase of streaming TV; in six short seasons, each easily consumed over a weekend, streaming accelerated into something like phase ten. Without “House of Cards” priming the audience for what a streaming show can do and what flaws within it can be forgiven, “The Marvelous Mrs. Maisel” and “The Handmaid’s Tale” might both have seemed too narratively baroque to land top Emmy wins. Top-tier talent like Julia Roberts or “The Crown” creator Peter Morgan or “Unbreakable Kimmy Schmidt’s” Tina Fey might have found streaming too big a gamble, rather than an opportunity to stretch out in a whole new way. And streaming might still be the province of catalog hits with which the audience was already familiar. Instead, streaming is the most powerful force in entertainment today, fittingly pushed into its position of prominence by two connivers willing to stop at nothing to get what they wanted. Audiences love a relentless, unyielding force, whether it’s the Underwoods or Netflix itself.