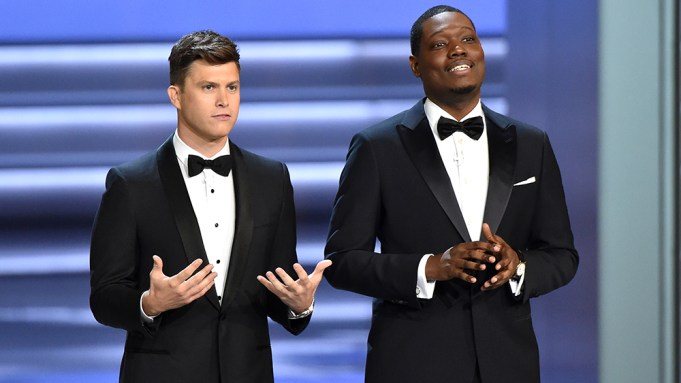 The greatest surprise at this year’s Emmys may have been two of the most powerful forces in television battling to a draw.

With a last-minute twist—”Game of Thrones” returning from a year of ineligibility to claim the Best Drama Series crown over competition including defending champion “The Handmaid’s Tale”—HBO knuckled its way into retaining its longstanding title as the winningest TV platform. But it shared the title with Netflix, which once again missed out on top drama or comedy honors but which picked up 23 wins — exactly as many as the longtime Emmy top dog.

It represented an odd anticlimax for a TV industry in flux, one so at odds with itself that it tended to throw off surprise wins like often-welcome sparks of inspiration. After an expected early run of comedy wins for Amazon’s “The Marvelous Mrs. Maisel”—ultimately the first streaming series to have won the Best Comedy prize—the awards tended to grow more unruly. To wit: “Westworld’s” Thandie Newton as Best Supporting Actress in a Drama; “RuPaul’s Drag Race” as Best Reality-Competition Series; “The Americans'” Matthew Rhys as Best Actor in a Drama; “Saturday Night Live” as Best Variety Sketch Series.

OK, that last prize was easy to predict weeks out from the ceremony. But it felt mildly startling in the midst of it, as an Emmys built around the talent of “Saturday Night Live” came to be defined by everything else other than its hosts and organizing conceit. Much of television was elevated as “SNL” came to seem diminished—with hosts Michael Che and Colin Jost, whose low-key schtick is familiar from “Weekend Update,” failing to raise the energy of the room or even to claim the room as their own. They ceded valuable real estate in the show to Maya Rudolph and Fred Armisen, doing cute but not-quite-necessary work as video commentators whose “bit” was that they didn’t know anything about the Emmys. More confusing still was the show’s opening, featuring among others Kate McKinnon and Kenan Thompson in a production number about how far television had to come and how far it has yet to go as regards inclusion. The hosts were absent, and entered minutes later into an ongoing show pursing their hands nervously and telling somewhat smirky jokes that felt far less pointed than the ones their own colleagues had just carried off.

No matter; the Emmys remain a bauble passed between broadcast networks (even as NBC, bound to broadcast higher-rated football on Sundays, punts them to a Monday), and they’ll inevitably be used as a vehicle to promote the face a network chooses. While it felt like a missed opportunity that Che and Jost were not better-prepared for such a big look, they’re bound, as the faces of an extremely valuable and heavily leveraged NBC property, to get more chances.

Thank a slate of winners fueled in large part by sheer shock for enlivening a dull ceremony. (The choice to cut back on presenter banter by playing actors’ clips before the presenters took the stage seemed like a welcome time-saver at first, but came to make the show feel airless between gleeful speeches.) Honorees created moments that felt bigger than the show encasing them, with special mention going to Henry Winkler, a Hollywood veteran honored for the first time for “Barry” (“I only have 37 seconds, I wrote this 43 years ago,” the actor said); Newton, an incandescent wit whose presence on an awards stage is long overdue; and the writers of “The Americans,” whose children’s unabashed and unalloyed joy as they leapt to their feet to applaud felt like a dispatch from a world less cynical than Che’s and Jost’s. Even the momentary awkwardness of the stage management of a presentation by Betty White, in which she thanked the Hollywood community for their decades of support, gave way to deeply felt emotion and meaning.

That White was a lost emissary from another era of TV—one in which, among other things, everyone watched three channels and earnestness reigned—felt all too clear. Moments of enthusiasm tended to get dampened by the hosts: “I just want to remind everyone that Jeff Daniels thanked his horse,” Michael Che said, referring to Daniels’s win for acting in the Netflix limited series “Godless.” Well, why not? Daniels beat back fairly tough competition; he’d earned the right for a moment of pure oddity and serendipity in a celebratory speech. But there was little else to call out for an audience that, in a fractured age, cannot be counted on to have heard of “Godless” at all. Less-commented-on by the hosts, but equally as effective in creating an alternate mood for the night, were speeches by Ryan Murphy (for “The Assassination of Gianni Versace”) and by RuPaul making clear and concise arguments about gay rights—up to and including, in RuPaul’s case, the right to self-esteem. The show, which too often stood simply for self-regard, felt effectively punctured at moments like these, and its question of inclusion, though certainly not fully answered, felt meaningfully addressed.

But if what one always remembers from awards ceremonies is not the hosts but the winners, this year’s Emmys provided a feast of the unexpected, culminating in a nail-biter finale that will only be resolved a year from now. Netflix, able to claim winners from “Queer Eye” to “Black Mirror” to “Seven Seconds” to “Dave Chappelle: Equanimity” to “The Crown” (for which Claire Foy’s win, in her final year of eligibility, was both a worthy surprise and a sign of the streamer’s power to push towards a win in a crowded field, even if it hasn’t yet claimed a top prize), is excelling at a volume game. HBO, reliant for wins largely upon “Barry,” “Westworld,” and “Game of Thrones,” has long trusted a boutique strategy that’s only now being meaningfully tested for bragging rights. For now, an uneasy equilibrium reigns. The show’s diversity of platforms and fundamental ideas of what an Emmy-worthy show can look like feels almost unrecognizable when compared to ceremonies from the start of this decade. Here’s to next year.