Golden Globes: Sterling K. Brown Thanks ‘This Is Us’ Creator for Writing ‘A Role for a Black Man’ 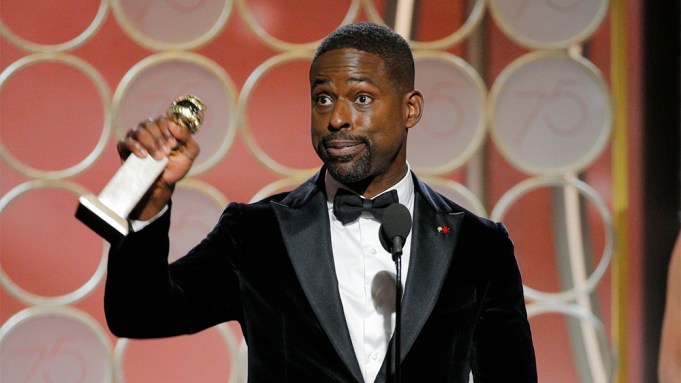 “This Is Us” star Sterling K. Brown took home the trophy for best actor in a drama television series at the Golden Globes on Sunday, and in the process, gave a shoutout to the creator of the NBC series, Dan Fogelman, for writing an inclusive role. His win marks the first time an African-American actor has won in the category.

“You wrote a role for a black man, that could only be played by a black man,” he said to Fogelman, who was in the audience. “And so, what I appreciate so much about this is that I’m being seen for who I am, and being appreciated for who I am. And it makes it that much more difficult to dismiss me, or dismiss anybody who looks like me. So thank you Dan.”

Backstage, Brown said he felt the weight of his historic win. “I stand up here hold this trophy. I hope another black actor will be up here holding this trophy not 75 years from now,” he said.

Last year Brown was eligible for a drama series actor nomination for his role as Randall Pearson on the first season of “This Is Us,” but the Hollywood Foreign Press Assn., failed to recognize his work. (He was, however, nominated for his supporting actor role as Christopher Darden in the limited series “The People vs. OJ Simpson: American Crime Story.”)

The Television Academy took notice of Brown’s turns from the light-hearted and almost goofy dad on the NBC’s family drama to the stressed out and breaking down son who just connected with his own biological dad, only to lose him months later. Brown was nominated for his first dramatic lead actor Emmy in the summer of 2017 and later took home that trophy in September.

Now he has his first Globe to match.