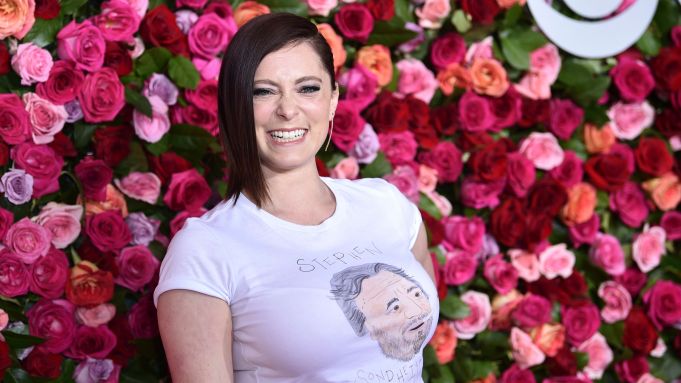 Writer, actress and singer Rachel Bloom from “Crazy Ex-Girlfriend” has been living her best life at the 72nd Annual Tony Awards.

Wearing a t-shirt with the face of Broadway legend Stephen Sondheim to the ceremony the creator hosted backstage interviews throughout the telecast. Throughout the night Bloom made several jokes including this self-deprecating one after the performance of “Mean Girls…”

“You know if the ‘Mean Girls’ from my youth could have sang and danced, maybe them calling me an ugly loser who would never find love would have been more palatable in three-part harmony?”

Not everyone was clued into backstage humor, including past Tony Award winner Neil Patrick Harris who tweeted his confusion at the comedians jokes.

I’m a big fan of yours. We’ve met numerous times and my husband, Dan Gregor, wrote for “How I Met Your Mother” for 5 years. Notably, he wrote the episode where your character finally meets his father.

“Who is the woman in the top hat backstage at The Tony Awards? Gideon remarked that she says ‘like’ and ‘oh my god’ a lot. I’m confused…” Harris tweeted.

Funny enough, Bloom has a history with NPH. She responded that not only was she a big fan, but that her husband used to write on his show “How I Met Your Mother.”

After this was pointed out Harris responded…. “Indeed! Well said. Thanks for the reminder. How was backstage?”

Indeed! Well said. Thanks for the reminder. How was backstage?

How was @thealexnewell not nominated for a Tony? @springsteen won, and he uses teleprompters. I don’t get the logic… #livetweetingtheTonys