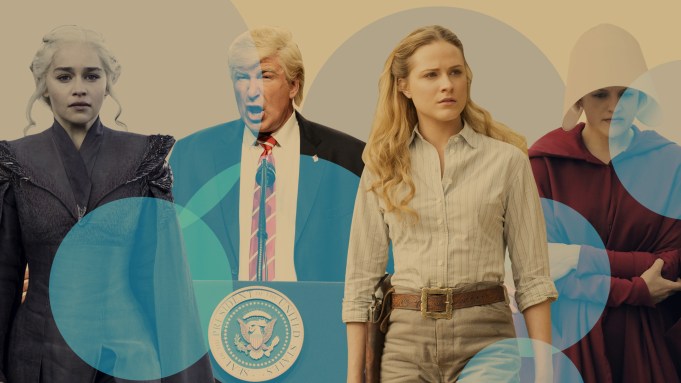 After a year off, “Game of Thrones” has returned to Primetime Emmy Award contention in a big way. The fantasy epic drew 22 nominations Thursday, the most for any show — edging out NBC’s “Saturday Night Live” and fellow HBO drama “Westworld,” which each attracted 21 nominations. Hulu’s “The Handmaid’s Tale” followed with 20 nominations.

FX’s “The Assassination Of Gianni Versace: American Crime Story” led all limited series with 18 nominations. “Atlanta,” also from FX, was the most nominated comedy series at 16.

Netflix, however, supplanted longtime industry leader HBO as the most nominated network or platform. The streaming service drew 112 nominations, up from 91 last year. HBO, despite the return of “Game of Thrones” to Emmy eligibility for its most recent season, slipped to 108 nominations from 111 last season.

The big haul for Netflix demonstrated the scope of its original programming lineup, which is fueled by unprecedented spending on content that the company’s chief content officer Ted Sarandos in May estimated would, this year, rise to $8 billion. While pay cabler HBO in recent years has relied on a handful of outsize awards-season performers to lift its Emmy fortunes, Netflix’s nominations were spread among a wide array of offerings — “Game of Thrones” and “Westworld” account for nearly half of HBO’s nominations; Netflix, for its part, boasts none of the 10 most nominated series this year.

Two series drew two lead-actor nominations each — “Westworld” with Jeffrey Wright and Ed Harris, who were elevated to lead status after competing in the supporting category last season; and NBC’s “This Is Us” with previous nominee Milo Ventimiglia and last year’s winner Sterling K. Brown. Last year’s nominee Matthew Rhys joined his “The Americans” co-star Russell with a nomination. As in the actress category, only one performer from a new series was nominated for best drama actor — Jason Bateman of Netflix’s “Ozark.”

Three freshman series and one long-absent veteran shook up the best comedy series category. HBO’s “Barry,” Netflix’s “Glow,” and Amazon’s “The Marvelous Mrs. Maisel” were nominated for their debut seasons alongside HBO’s “Curb Your Enthusiasm,” which returned to TV last year with its first new season since 2011. ABC’s “Black-ish” and HBO’s “Silicon Valley”earned nominations for best comedy series with fellow returning nominees “Atlanta” and Netflix’s “Unbreakable Kimmy Schmidt.” Not present was multiple past winner “Modern Family” of ABC, the first time in the show’s nearly decade-long history that it failed to be nominated for best comedy series. HBO’s “Veep,” which has won the last four comedy-series awards, was not eligible this year after production on the show’s forthcoming final season was delayed due to star Julia Louis-Dreyfus’ battle with cancer.

Louis-Dreyfus’ absence from the best comedy actress category, which she has won for six consecutive years, opens up a field that this year includes returning nominees Pamela Adlon of FX’s “Better Things,” Allison Janney of CBS’ “Mom,” Tracee Ellis Ross of “Black-ish,” and Lily Tomlin of Netflix’s “Grace and Frankie,” as well as first-time nominees Issa Rae of HBO’s “Insecure” and Rachel Brosnahan of “The Marvelous Mrs. Maisel.”

“The Handmaid’s Tale” star Samira Wiley and star “New Amsterdam” star Ryan Eggold revealed this season’s nominees on Thursday. The actors, along with Television Academy chairman and CEO Hayma Washington and president and CEO Maury McIntyre, made the announcement from the Wolf Theatre at the Television Academy’s Saban Media Center.