Peter Dinklage on the Last Day of Shooting ‘Game of Thrones’: ‘It Was Very Sad’ 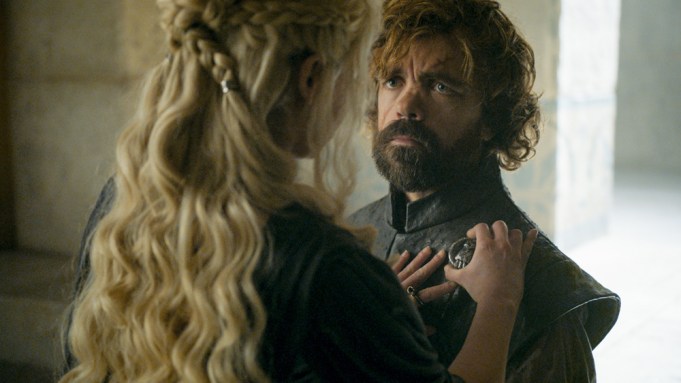 After his Emmy win for best supporting actor in a drama on Monday night, Peter Dinklage spoke about the upcoming end of “Game of Thrones” and his portrayal of Tyrion Lannister.

Backstage after winning his award, his third win and seventh nomination for “GOT,” Dinklage admitted that after shooting his last day on the show in July, “It was very sad. This is not only a great TV show to be a part of, but it was an enormous family to be a part of.”

“I’m sure you’ve heard that before from actors but in this case I was far from home; I live in New York and we shot the show in Europe, so many times I had to stay there and couldn’t go home on the weekends and really developed deep roots in the community of Ireland and some of the other countries we shot in,” he added. “It was definitely hard to say goodbye to because it wasn’t just saying goodbye to the show, I was saying goodbye to a life over there.”

Dinklage also said that though the HBO show has become a monster hit, he had some initial concerns about taking on the world of Westeros and the sci-fi fantasy ganre.

“Unfortunately before this character, many times people my size weren’t interesting enough for me to be interested in doing it,” he explained. “I had done it one or two times before and it sort of didn’t, you know, grab me but [showrunners] David [Benioff] and D.B. [Weiss] relieved by concerns very quickly.”

Reflecting on the success of “Game of Thrones,” which will air its eighth and final season in 2019, Dinklage said that after years of working on indie movies with limited audiences, “I absolutely adored this character and the stories we were telling. It’s so beautiful when other people end up feeling the same way you do.”

“Game of Thrones” was also a big winner of the night, taking home the best drama trophy.