Watch the Musical Emmy Opener, ‘We Solved It!’ 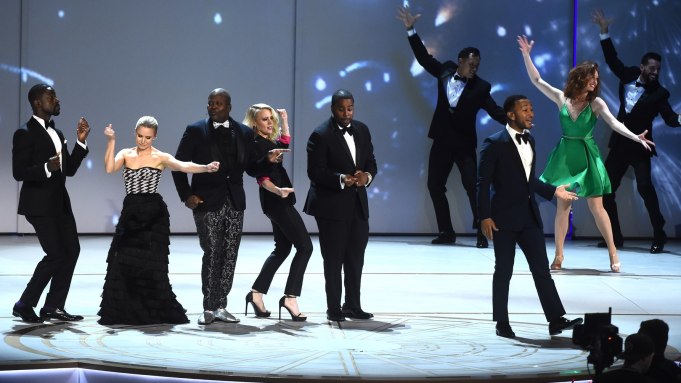 The annual Emmy Awards celebrated two big milestones this year: its 70th anniversary and also fixing all the diversity problems in Hollywood.

“Saturday Night Live” stars Kenan Thompson and Kate McKinnon welcomed nominees, Academy members, and guests with the announcement that this year’s class of honorees is the most diverse in Emmy history. Shortly after this reveal, the two declared that diversity was no longer a problem in Hollywood, and celebrated with a song.

“We solved it!” the duo sang, yielding the stage to Kristen Bell, Tituss Burgess, and Sterling K. Brown.

“We solved it, banished every creep who broke the law, now they’re serving hard time at that Arizona spa,” Bell sang.

“We solved it, this room is so diverse. From Democrat to liberal Democrat, shall we sing another verse?” Brown sang.

The musical number continued on adding singers including Andy Samberg, Ricky Martin, and RuPaul, who arrived with a phone call informing Thompson that they hadn’t actually solved anything. Also worth noting that Samberg was ushered off the stage rather quickly after McKinnon informed him that he couldn’t be a part of the number, being a straight white man.

After a short break for the “One-of-Each Dancers,” the whole thing was brought to a close with John Legend and a bunch of computer-generated fireworks.