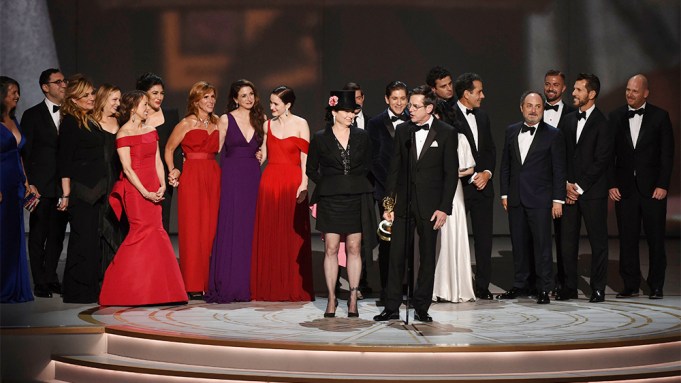 “The Marvelous Mrs. Maisel” seized an open comedy field and “Game of Thrones” reasserted its reign over dramas Monday at the 70th annual Primetime Emmy Awards.

Amazon’s “Maisel,” in its first eligible year, capped a night in which it dominated its categories with a win for best comedy series — the first streaming show to nab that prize. With five wins — including one for star Rachel Brosnahan as best comedy actress — “Maisel” took home more awards than any other show Monday night. With its three Emmys won at the Creative Arts Emmys last weekend, “Maisel” tied “Saturday Night Live” for the second-most Emmys this year behind HBO’s “Game of Thrones,” which got nine.

“Game of Thrones” made a triumphant return to the Emmys after not being eligible for last year’s awards due to a long gap between seasons. The series win was its third in the category, whose winner last year, Hulu’s “The Handmaid’s Tale,” was shut out Monday night after winning three Creative Arts awards last weekend.

With the bulk of the comedy categories stacked at the top of the show, “Maisel” hit a hot streak early. Brosnahan’s win echoed her victory in the same category at the Golden Globe Awards earlier this year. “Maisel,” Brosnahan said, is “about a woman finding her voice anew.” She then struck a political note, adding, “One of the most important ways that we can find and use our voices is to vote,” urging viewers to register.

The comedy-series category was one of this year’s most interesting, having been carried for the last three years running by HBO’s “Veep,” which wasn’t eligible this year. Since 2007, only three shows had won the Emmy for comedy series — NBC’s “30 Rock,” ABC’s “Modern Family,” and “Veep.”

“Maisel,” received a big awards-season push from Amazon this year, after the tech giant’s new entertainment chief, Jennifer Salke, identified it as a standout in the company’s current slate upon joining from NBC earlier this year. The show’s performance lifted Amazon to eight Emmys, tied with CNN for fifth most behind HBO and Netflix (23 each), NBC (16), and FX (12).

The drama-series win for “Game of Thrones” secured HBO’s tie with Netflix for most Emmy wins this year. Netflix this summer ended HBO’s 18-year streak as the network or platform with the most Emmy nominations, a stat that many had pointed to as indicative both of Netflix’s massive original-programming ambitions and also of the growing creative dominance of streaming services in general. “Game of Thrones” star Peter Dinklage also won for best supporting actor Monday night, a week after the show took seven Creative Arts awards.

Claire Foy and Matt Smith of “The Crown” presented the first award, for best supporting actor in a comedy series, to Henry Winkler of HBO’s “Barry.” Winkler won against a formidable field that included previous winners Louie Anderson of “Baskets” and Alec Baldwin of “Saturday Night Live.” “I wrote this 43 years ago,” said Winkler, a television veteran who has been nominated for six previous Emmys, including three times for his work as Arthur Fonzarelli on “Happy Days,” but never won.

Bill Hader, the star and executive producer of “Barry,” later won for best comedy actor, making “Barry” the only comedy series beside “Maisel” to win an award Monday.

The drama awards proved far more diffuse. After Dinklage won for supporting actor, HBO took its second award of the night when Thandie Newton of “Westworld” won for best supporting actress in a drama series.

“I don’t even believe in God, but I’m going to thank her tonight,” Newton said. She then dropped an f-bomb.

Diversity was a big theme of the show, which kicked off with a musical number led by Kenan Thompson and Kate McKinnon of “Saturday Night Live” that focused on diversity in the entertainment industry. The number featured Sterling K. Brown, RuPaul Charles, Kristen Bell, and Tituss Burgess singing the refrain “We solved it.” Thompson and McKinnon were followed by “SNL” castmates and Emmys hosts Colin Jost and Michael Che, whose opening monologue touched on issues of diversity and sexual harassment.

Amazon’s dominance in the comedy category via “Maisel” was mirrored in the limited-series categories by Netflix. Merritt Wever of Netflix’s “Godless” won the award for supporting actress in a limited series. Wever’s castmate in the Western, Jeff Daniels, followed with a win for best supporting actor in a limited series. He thanked Netflix “for your support and letting artists be artists.” Daniels also thanked his horse from “Godless,” whose name is Apollo. “He was Jeff Bridges’ horse on ‘True Grit,’ and I felt that he was making unfair comparisons,” Daniels said.

Charlie Brooker and William Bridges won for best writing for a limited series for the “USS Callister” episode of “Black Mirror,” giving another award to Netflix. Brooker, who created the science fiction anthology series and writes most of its episodes, thanked “U.S. titans of sci-fi, ‘Star Trek’ and ‘The Twilight Zone.'”

The first award of the night to go to a basic cable show was Ryan Murphy’s win for best director in a limited series for “The Assassination of Gianni Versace: American Crime Story.” Murphy, who earlier this year left his longtime overall deal at 20th Century Fox Television for a new agreement at Netflix, began his acceptance speech by thanking four Fox executives — Dana Walden, Peter Rice, Gary Newman, and John Landgraf. Murphy later accepted again when “The Assassination of Gianni Versace” was recognized for best limited series.

John Mulaney won the Emmy for best writing in a variety special for his stand-up special “John Mulaney: Kid Gorgeous at Radio City.” Oscars helmer Glenn Weiss won for director in a variety special. Weiss, whose mother died two weeks earlier, turned his acceptance speech into an onstage proposal, when he asked his girlfriend to marry him — even kneeling onstage to put a ring on her finger, in a moment that drew a delighted response from the audience. Weiss, as his now-fiance made her way to the stage, joked to Emmys director Hamish Hamilton, “Hamish, I’m gonna be a minute.”

“Saturday Night Live” won for best variety sketch series — the 72nd Emmy for the long-running program, which has won more awards than any other show in Emmy history. Series creator Lorne Michaels, who served as executive producer of Monday night’s Emmy telecast, accepted the award, noting that when the show premiered in the ’70s, “There were a lot of articles about how the networks wouldn’t be here much longer. But here we are, it’s 2018, it’s the Emmys, and we’re on NBC.” The win was one of only two Monday night for a broadcast network — the other being Weiss’ Emmy for the Oscars show, which aired on ABC.