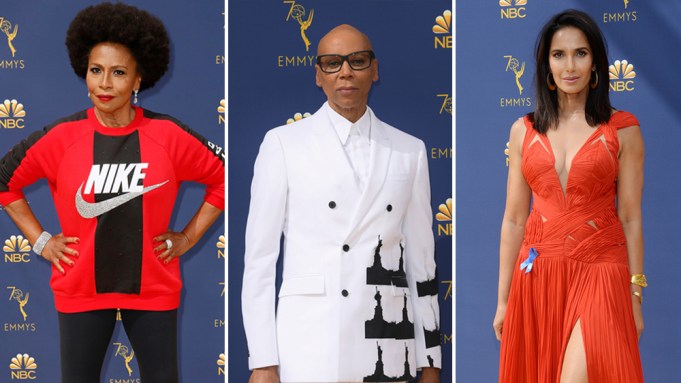 The Emmys red carpet is always the place for high fashion and bold looks, but this year, TV’s biggest night served as a platform for a number of political statements ahead of the awards ceremony.

“Black-ish” star Jenifer Lewis wore a Nike sweatshirt to the awards show in support of Colin Kaepernick, who is featured in Nike’s current campaign. The former NFL player started the movement of kneeling during the pre-game national anthem in protest of police brutality toward African-Americans.

“I am wearing Nike to applaud them for supporting Colin Kaepernick and his protest against racial injustice and police brutality,” she told Variety on the carpet, adding that she wondered, “What can I do? What can I do that’s meaningful? I’ll wear Nike. I’ll wear Nike to say thank you. Thank you for leading the resistance! We need more corporate America to stand up also.”

“Glow” director Jesse Peretz’s wife, Sarah Sophie Flicker, appeared on the carpet with “Stop Kavanaugh,” along with the phone number to the U.S. Senate, written on her arm. The statement is in response to Supreme Court nominee Brett Kavanaugh, who has been accused of sexually assaulting Christine B. Ford, a female classmate, when they were in high school. He will face a Senate vote on his nomination next week.

#Emmys GLOW director Jesse Peretz and his wife Sarah who has quite the arm accessory this year. pic.twitter.com/BSDPyjvTCa

Additionally, Time’s Up, the most prominent organization in support of the #MeToo movement, provided pins saying “I Believe Christine Blasey Ford” and “I Still Believe Anita Hill” to attendees. Hill was in a similar position to Ford in 1991, when she testified that Supreme Court Justice Clarence Thomas had sexually harassed her.

Padma Lakshmi arrived on the red carpet with a blue ribbon pinned to her dress, recycling a trend that was popular at the 2017 Emmy awards. The ribbon supports the American Civil Liberties Union, which has fought to maintain the Dream Act, which allows those who immigrated to the U.S. as children a clear path to citizenship.

Additionally, RuPaul wore a white suit covered by black outlines of the Statue of Liberty, and “The Alienist” actress Q’orianka Kilcher wore a pin that read, “I am a voter.”

RuPaul rocks a killer suit at the #Emmys. Catch up with all the arrivals: https://t.co/wMu3W6vNHP pic.twitter.com/Xr53dVOeDr