Elisabeth Moss on Her ‘Handmaid’s Tale’ Win: ‘Margaret Atwood, This Is for You’ 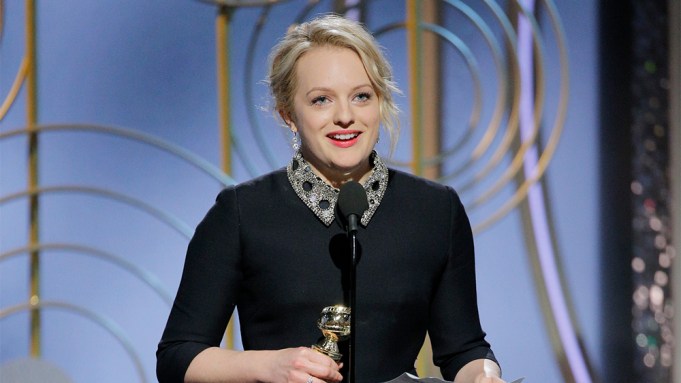 Elisabeth Moss took home the trophy for best actress in a television drama series for “The Handmaid’s Tale” at the Golden Globes on Sunday.

Moss accepted the award with a quote from “The Handmaid’s Tale” by Canadian author Margaret Atwood. “We were the people who were not in the papers. We lived in the blank white spaces at the edges of print. It gave us more freedom. We lived in the gaps between the stories,” Moss quoted.

Moss then went on to praise the author and all those fighting through the years for the ideals behind the “Time’s Up” movement that is taking place today. “Margaret Atwood, this is for you and and all of the women who came before you and after you who were brave enough to speak out against intolerance and injustice, and to fight for equality and freedom in this world. We no longer live in the blank, white spaces at the edge of print. We no longer live in the gaps in the stories. We are the stories in print, and we are writing the stories ourselves,” she said.

Moss followed up her 2017 dramatic actress Emmy win for her role as the titular handmaid Offred in Hulu’s “The Handmaid’s Tale” with this honor from the Hollywood Foreign Press Assn. She beat last year’s winner Claire Foy from Netflix’s “The Crown,” as well as Caitriona Balfe from Starz’s “Outlander,” Maggie Gyllenhaal from HBO’s “The Deuce,” and Katherine Langford from Netflix’s “13 Reasons Why.”

This marks Moss’ second Globe win. She previously took home the limited series or TV movie actress trophy in 2014 for her work in Sundance TV’s “Top of the Lake.”

Moss was also nominated in the dramatic TV actress category in 2011 for AMC’s “Mad Men.”