As the host of “The Daily Show,” Trevor Noah sits behind a desk four nights a week to deliver comedic and thoughtful takes on the news. But by day, he prefers to keep his midtown Manhattan office a more open design. “A desk feels like a waste of space when the thing you’re using to conduct all your business is in the palm of your hand,” he says. He does everything from answer emails to read on his phone. Desks, he says, often remind him of high school, which is not a feeling he “worked [his] whole life to achieve. It feels nice to be in a space where I feel like I’m enjoying myself because I love writing comedy, but I feel free to do whatever I want to do.” 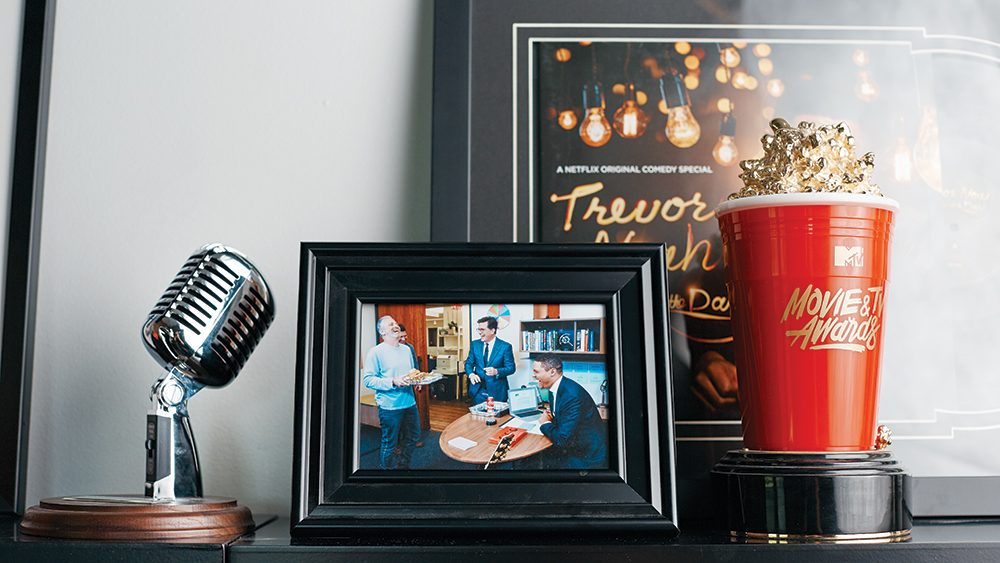 Tremendous Trio
Although he admits he isn’t good about framing photographs from his life, Noah does keep one important candid close by: a shot of himself with former “Daily Show” talent Jon Stewart and Stephen Colbert. He chose this photo because their captured laughter showcases “the joy of making the product, as opposed to just the product itself.” But he also likes how it shows the bond they share, across generations and backgrounds. “How on earth would these three people become friends and end up in the same room as each other telling jokes and having a similar job?” he marvels. “I love that about comedy.”

Statement Sweatshirt
The office building for “The Daily Show” cranks the air conditioning in the summer, which prompted Noah’s assistant to ask him if he wanted to make up fun sweatshirts for the staff. While he liked the idea, he didn’t want to put the show logo on them, “forcing people to wear uniforms,” he says. Instead, he had them printed with quotes from Donald Trump. “Apart from him, they could be cool lines,” he says of “High Quality Person,” “Fake News Media” and the one he kept for himself, “Stable Genius.” “It’s a paradox — it just feels like something a crazy person would say [and] I liked what it represented to me.”

Nostalgic Distraction
Born and raised in South Africa, Noah grew up playing football, or American soccer. He keeps a soccer ball in his office to take “a little bit of the edge off” while working. “It’s like a meditative state you go into,” he says of playing with the ball. It’s also a reminder of his hometown and childhood friends — though not a literal one. The ball was purchased more recently, as he jokes that “all of the balls from my childhood are in my next door neighbor’s yard.”

Heritage Honors
Noah scored two NAACP awards for his autobiographical memoir “Born a Crime: Stories From a South African Childhood,” and he keeps one on a mantel above his couch. “When I was growing up, black Americans were something I aspired to,” he says. “Once I started learning about America and its history, the NAACP is an institution that played such a big role in the civil rights movement and defining black Americans’ struggle for freedom; it really is an honor to be honored in that space.” He has also been nominated for NAACP awards for “The Daily Show,” and he says being a part of that conversation “really felt like it was meeting with the extended family of the other side of the world.”

Celebratory Champagne
After Noah sat down for a “SuperSoul” conversation with Oprah Winfrey earlier this year, the media mogul sent him a bottle of bubbly. “That’s just something I’m going to keep with me as long as I can.” While he knows “everything could fall apart tomorrow,” he says, those mementos help him appreciate all of the ups and downs of life and the industry. “I just like to sit and think to myself, ‘Hey man, don’t ever forget how amazing this journey has been,’” he says.