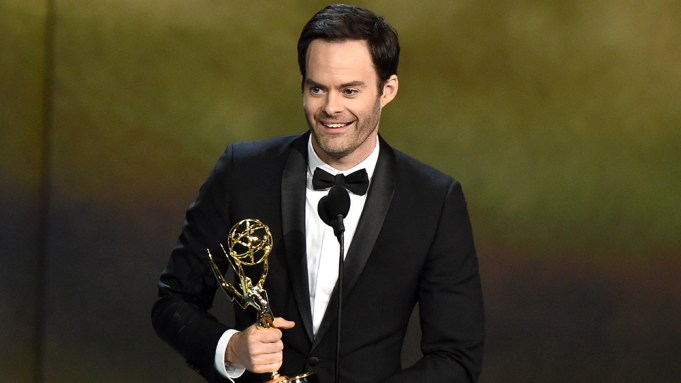 “I was taught you should always make other people look good. So what I did was I hired a bunch of really great actors that made me look really good. So I share this with the cast,” said the “Saturday Night Live” vet, who also co-created the HBO hitman comedy for which he won Monday.

This was Hader’s first time eligible for HBO freshman comedy “Barry,” in which he stars as the titular hitman in the series, in addition to writing, producing and directing. His efforts earned him an Emmy nom in the comedy writing and comedy directing category as well, though Amy Sherman-Palladino took those prizes for “The Marvelous Mrs. Maisel.”

Hader has one previous Emmy win, for his work on the “Margaritaville” episode of “South Park.” His other roles include “Bob’s Burgers,” “The Mindy Project,” and feature “The Skeleton Twins.”

Backstage, Hader said the offbeat series was the kind of hybrid comedy that could only work on a premium outlet like HBO.

“There’s a version of this show that is kind of jokey and treats the violence and emotion of the character in a broad way to maintain the humor,” Hader said. “I remember coming in to HBO to pitch them what was the pilot episode. They had just seen a movie I’d done called ‘Skeleton Twins.’ They said ‘We’re more interested in that.’ And I thought ‘Oh thank god. I was more interested in dealing with the real emotion of what that guy must be going through.”

“Barry” was also a challenge for Hader as an actor. “I guess I learned that I can play quiet,” he said. “There’s a lot of face acting in ‘Barry.’ “