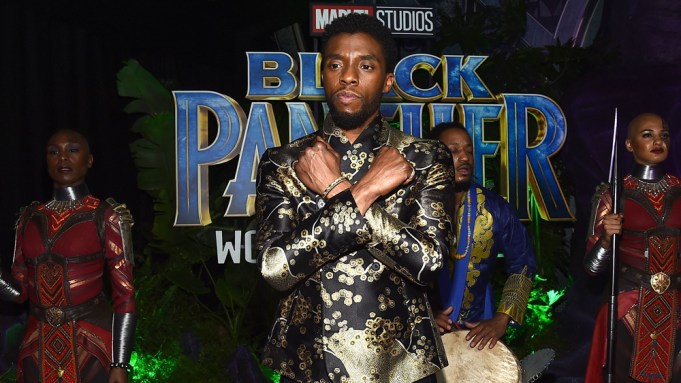 Marvel’s “Black Panther” world premiere, held Monday night at Hollywood’s Dolby Theatre, was a celebration of black excellence, and a who’s who of artists in film and music who coordinated to wear colorful, African-themed fashion.

Ryan Coogler’s “Black Panther” is the first Marvel film to feature a black superhero in a titular role, played by Chadwick Boseman, who was first introduced in “Captain America: Civil War.”

Coogler is best known as director of “Fruitvale Station” and “Creed,” which starred Michael B. Jordan, cast as villain Erik Killmonger, in “Black Panther.” Coogler also wrote the film with Joe Robert Cole.

The latest entry to the Marvel Cinematic Universe picks up where that “Civil War” left off, following T’Challa — a.k.a. Black Panther — who, after the death of his father, the king of Wakanda, returns home to assume the throne. In short order, T’Challa is called on to protect the people and way of life of Wakanda, an isolated, technologically advanced African nation.

Angela Bassett, who plays T’Challa’s mother, Ramonda, was jubilant on Monday night, saying that the most special aspect of “Black Panther” was “just seeing all these beautiful, talented black people in one place, this black nation, coming together, technologically advanced, un-colonized with so much swag and brilliance.”

Women played indispensable roles in the film and in the fictional Wakanda, Bassett said. T’Challa, for instance, relies on the Dora Milaje, his royal security detail of fierce female warriors. “He can’t do it without them,” she said. “There is no king without a queen is the thought and sentiment in African nations. That queen is his mother, his sister, his all-female guard. Behind the scenes, it’s Ryan Coogler with his first (assistant director), his director of photography, his costumer designer, his production designer. They are kings because of the queens.”

The premiere featured a royal purple carpet under a tent on Hollywood Boulevard. Security was heavier than usual, but it had no impact on the celebratory mood of stars. Kendrick Lamar, who produced and curated the soundtrack, was on hand. Other attendees included Donald Glover; the cast of “Black-ish,” including Anthony Anderson and Yara Shahidi; Ava DuVernay; Don Cheadle; Laurence Fishburne; and Tessa Thompson.

Daniel Kaluuya, fresh off his Oscar nomination for best actor in “Get Out,” said Tuesday that the film is an honest reflection of the world, showcasing a perspective not frequently seen.

“Is it a shift or is it a reset button?” he said. “This is how it’s supposed to be. This is the actual world, and this reflects the world. We just have to tell honest stories that reflect the world from all perspectives, not just one.”

Daniel Kaluuya says Hollywood has to tell stories that reflect all perspectives at the #BlackPanther premiere https://t.co/6Hv5AHzVNH pic.twitter.com/BwWBd06F9c

“The Great Debaters” actor Denzel Whitaker said “Black Panther” is a film that counters negative stereotypes of black Americans at a time when it’s perhaps most needed.

“It’s very timely. Especially being in the Trump era,” Whitaker said. “Trump getting in office has awoken a lot of spirits and a lot of conversation that we thought were gone from America, that we thought we were past in our American history.”

Denzel Whitaker (@Blackmouf) says #BlackPanther is "very timely…in the Trump era" on the red carpet of the world premiere. Check out photos from the carpet here https://t.co/6Hv5AHzVNH pic.twitter.com/o8yhgo6uc0

“Beyond his obvious problems that he has with multiculturalism, why would you not expose yourself to the best people in whatever field it is, be it music or film?” Oswalt said.