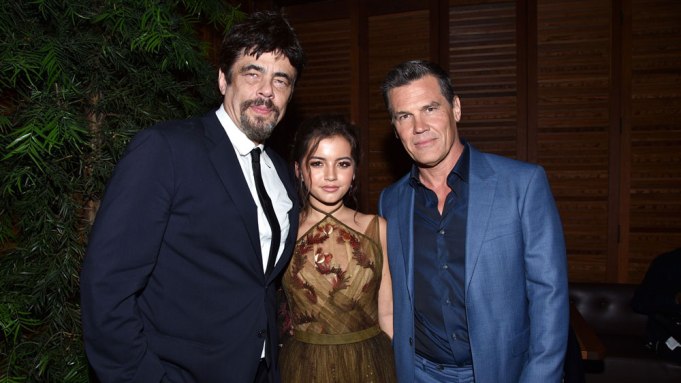 Benicio Del Toro is ready for another “Sicario” movie and more “Star Wars” — even if neither role has been offered yet.

“There’s nothing on my plate right now, but would I like to? Yes, sir,” he answered at Wednesday night’s world premiere of Sony’s “Sicario: Day of the Soldado” at Los Angeles’ Westwood Regency Theatre.

Benicio del Toro would like to do another #StarWars film, and/or a #Sicario3 https://t.co/wRMDrGN2a0 pic.twitter.com/S3M9VhqjZC

Del Toro portrayed codebreaker DJ in “Star Wars: The Last Jedi” and is returning as the ruthless agent Alejandro Gillick in the “Sicario” sequel — not an easy task, he asserted.

“It’s always tough,” he admitted. “Even though I’ve played the character before, this is a different Alejandro in this film. We discover another side to him and it’s interesting to work that arc in the middle of a roller coaster thriller.”

“Sicario: Day of the Soldado” was shot two years ago in New Mexico and centers on issues of the drug war along the U.S.-Mexico border, terrorism, and immigration. Matthew Modine, who plays the secretary of defense in the new installment, praised screenwriter Taylor Sheridan for having the insight to portray the current state of society ahead of time.

“I don’t think any of us saw where we’d be in this moment,” Modine added, “Like ‘1984,’ like George Orwell writing a book well before 1984 that pre-visioned where we would be as a society.”

Modine also joked that President Donald Trump would enjoy the movie: “He’d like it because he doesn’t have to read.”

Mexican actor Manuel Garcia-Rulfo said he’d tell Trump many things if he could, including the need to build bridges instead of walls, adding, “The thing about the kids being caged on the border broke my heart.”

Producer Molly Smith admitted that the film portrays extreme violence, noting that an estimated 140,000 people have died as a result of Mexican drug cartel violence since 2006.

“It’s a war right next to us that a lot of people don’t really write about,” she added. “It’s rooted in authenticity, even though our movie is fictional. … It’s a brutal world down there.”

Why the extreme violence of "Sicario: Day of the Soldado" is necessary, according to the film's producers https://t.co/wRMDrGN2a0 pic.twitter.com/lnyVfrjGWv

Italian director Stefano Sollima, who helmed the “Gomorrah” series, said he was attracted to Sheridan’s script because of its portrayal of an amoral situation.

“You have a crazy world, really ambiguous characters, without never judging them,” he reflected. “You try to tell their story with passion and honesty.”

#SicarioDayoftheSoldado director Stefano Sollima on what attracted him to this script and movie https://t.co/wRMDrGN2a0 pic.twitter.com/e9LRvBuYxx