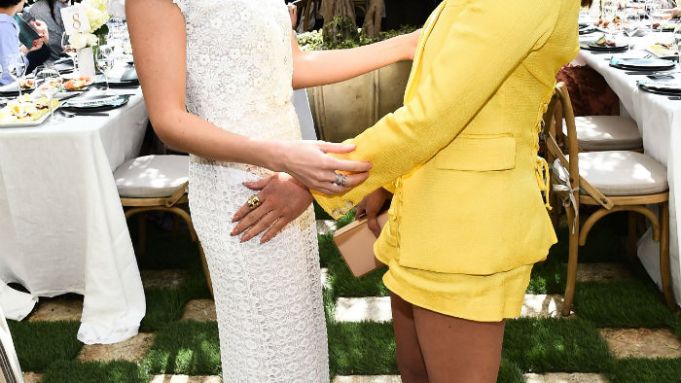 In the spirit of the Oscars, young American designers were celebrated at the inaugural Runway to Red Carpet luncheon, hosted by Variety, Women’s Wear Daily, and the Council of Fashion Designers of America.

Held at the Chateau Marmont on Tuesday afternoon, the event welcomed a mix of stars from the entertainment and fashion worlds, with Alison Brie, Diane von Furstenberg, January Jones, Olivia Munn, Lea Michele, and Vera Wang among those on hand.

Wang, a CFDA board member, was Runway to Red Carpet’s special guest, and opened the luncheon with a conversation about her career and advice to young designers.

She joked that her career began in “1912 and the Titanic was sinking,” when she spent years working at Vogue and Ralph Lauren before starting her own company.

“What I realized right off the bat is it’s not only about your work and how hard you work and what you create, it’s also who’s wearing it,” Wang said at the event. “You can do the most extraordinary blazer tailoring and the most extraordinarily draped gown, but if no one sees it, it’s a secret.”

For the designer, her big break came when she dressed Sharon Stone, who she had become enamored with after seeing “Total Recall,” and dreamed of dressing on the red carpet one day.

“We met through this young woman and we made a pact that if she ever got to the Oscars and if I was lucky enough to still be in business, I would want to dress her,” Wang said. That became a reality on the 1993 awards circuit for her film “Basic Instinct.” “It was one of those insane moments where it was the right girl, the right dress at the right time,” she added.

Wang also spoke about the Golden Globes red carpet blackout in support of the #MeToo movement, for which she dressed Meryl Streep.

“What was so amazing about the Golden Globes was that it was all our industries put together,” she said. “It wasn’t just fashion, it wasn’t just the world of entertainment, of TV and film, it wasn’t just music; it was everybody coming together with a common goal.”

Wang added that she thought it gave the world another look at Hollywood and the impact it can have, saying, “I think sometimes, although we are so influential in culture globally, all of these industries, sometimes they do think of us as all glamorous, all fun, and maybe sometimes frivolous. When we could raise that kind of power and awareness, it was very, very moving to someone of my generation.”

The luncheon also focused on the Runway to Red Carpet showcase, which will have CFDA designers in the Fred Segal store on Sunset Boulevard on display from Feb. 20 to March 3, the day before the Oscars. The showcase is intended to give access to American designers for stylists and those in entertainment ahead of the awards show.

Karma Automotive was a premiere partner for the luncheon.

Check out more photos from this event in our online gallery here.