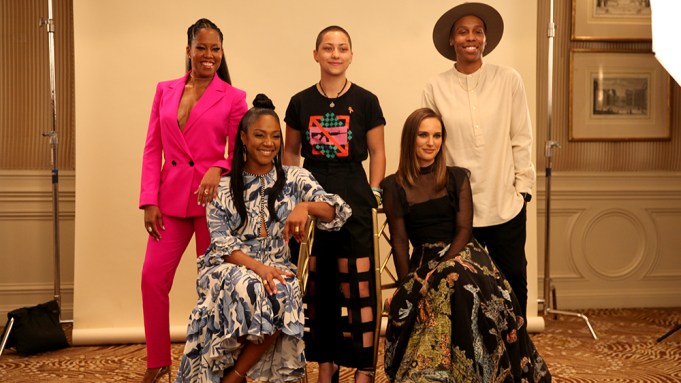 The forward momentum of #MeToo, the looming midterm elections and a pervasive spirit of sisterhood across industries and social lines were banner themes at Friday’s 10th Annual Variety Power of Women luncheon presented by Lifetime in Beverly Hills.

“I can’t remember a time when women in this industry have huddled together,” said Waithe, honored for her work with The Trevor Project, a non-profit that primarily works on suicide prevention for LGBTQ youth. “Not just to discuss strategy, but to share baby pictures and words of encouragement.”

Waithe, an active member of the Time’s Up movement, remarked that the sea change in Hollywood came when women “decided to rise up and scream at the top of our lungs and become a chorus of rebels that won’t be treated like second class citizens.”

“Black-ish” star and stage vet Jenifer Lewis hosted the occasion, introduced by Variety co-editor-in-chief Claudia Eller and publisher Michelle Sobrino-Stearns, waking up top female executives and power players with salty language and spontaneous soul singing. Her candid speech even hit on Kanye West, decried this week for meeting with President Donald Trump in the Oval Office for a wide-ranging and often-rambling discussion.

“I know what mania looks like. That man in the Oval Office and Kanye West and others around him are probably mentally ill,” said Lewis, before handing the floor to presenters like George Clooney, director Gina Prince-Bythewood, Gina Rodriguez and ABC Entertainment Group president Channing Dungey.

Dungey presented to newly-minted Emmy winner King, and was one of several people who applauded the star’s visibility going back to the mid-80s sitcom “227.”

“You cannot feel or understand real power unless you feel what it means to empower,” said King, honored for her work with the I Have A Dream Foundation, which provides academic and emotional support for kids in low-income communities.

Portman, celebrated for her work as a founding member of Time’s Up, delivered a speech that rivaled any of the best monologues from her day job.

“It’s been a rough couple of weeks, I don’t sleep,” she said, referring to the controversy surrounding Supreme Court Justice Brett Kavanaugh’s appointment to the bench. “But we had an incredible week at Time’s Up. We welcomed our first president and CEO Lisa Borders.”

Portman then expertly tackled some of the biggest misconceptions about women in the workplace, dismal hiring practices in Hollywood and the widespread culture of retaliation and isolation women face from their male peers. She also name-checked Harvey Weinstein and bemoaned the successful rejection of one of the charges against him in New York.

“If a man says a woman is crazy or difficult, ask him, ‘What bad thing did you do to her?'” Portman said to rapturous applause (King, who took her prize after the “Black Swan” star, simply said: “Natalie Portman 2020!”).

Equally enthusiastic was the ubiquitous Haddish, who was honored for her work with The Unusual Suspects Theater Company, which helps underprivileged kids through original stage productions. She underscored the importance of maintaining her own identity in a Hollywood that loves labels.

Haddish said she was lucky to encounter “a lot of people along the way that mentioned I needed to be me. I thought I was a white woman for a long time. I’m not. I did my 23AndMe.” She also cracked that she had two cousins just out of prison who needed work, imploring the day’s Empowerment Award winner and Participant CEO David Linde to hire them.

Jokes aside, Haddish concluded that “You become a bitter-ass bitch, when you being somebody you not.”

A Venetian Hotel-sponsored bar pumped out artisanal bloody marys while a souped up Audi installation dialed up the energy.

The luncheon was brought to a standstill with the afternoon’s top sighting: Gonzalez, honored for co-founding March For Our Lives. The 18-year-old was introduced by George Clooney, and was touted as a beacon of hope for the future by many of the day’s honorees.

“Everybody in this room is in a unique position. You can and have inspired peace and understanding,” Gonzalez said. “You can inspire your audience to vote.”