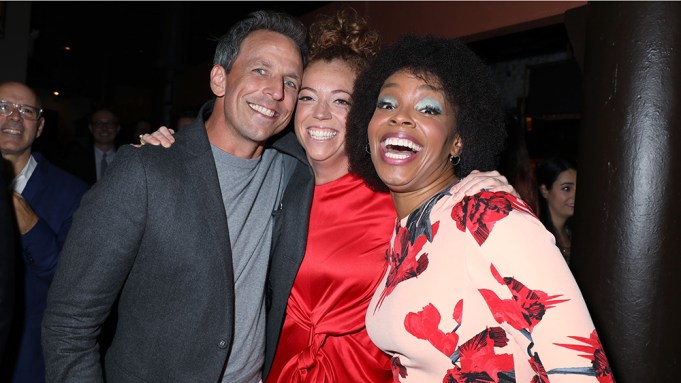 Lewinsky was one of many who jumped at the chance to chat with Farrow and praise the award-winning journalist for his extensive coverage of sexual harassment in Hollywood.

“We’re in a moment of sea change right now, and we wouldn’t be seeing that if a bunch of people, most of them woman, hadn’t come forward to tell really painful stories,” Farrow told Variety on the red carpet. “We saw a lot of hard truths come out this year, and I’m really proud of us for confronting that.”

Meyers was surrounded by his team of writers and his wife Alexi Ashe, who famously gave birth in their apartment lobby last summer. The bashful guest of honor opted not to take the stage and give a speech, though Meyers may have regretted his decision once he realized what was in store — “Late Night” writer Amber Ruffin and comedian Michelle Wolf took the mic to roast their friend. As the duo walked up to deliver their sarcastic speech, Meyers shouted: “No! You should have told me what plan B was!”

Wolf kicked off the impromptu gabfest: “This is what Seth would have said had the had the balls to give a speech. I saw Seth and immediately he goes to me, you know what Kanye did on ‘SNL’ was great.” Ruffin chimed in, “That is true! That’s word for word what he said. And then he said to me, ‘Amber, you’re a lady. I wish you didn’t work for me because you’re a lady.”

The two got in a few more jabs at Meyers’ expense. “We love Seth Meyers very much, and he deserves to be f—ing No. 1 on Variety‘s 50 most powerful people in New York, even though he’s terrible,” Ruffin said.

Wolf agreed. “If there’s one thing when you look at Seth, you think power,” she said. “This guy… if you need something to open, if you have a tough pickle jar, you go to Seth.”

As the pair exited the stage, Meyers cracked, “How long did you guys rehearse?”

Claudia Eller, Variety’s editor in chief, gave a friendly shoutout to Meyers. “You were a fabulous cover subject and you’re adorable. What can I say? I had a hard time picking your photo for the cover.” After Eller’s speech, Variety’s New York bureau cheif Ramin Setoodeh, who spearheaded the annual issue, thanked the 50 honorees.

“It used to be on date night, that we would tuck away our phones,” Fox News anchor Harris Faulkner said, speaking of her husband, who accompanied her at the Wednesday night event. “Now, because of everything that’s going on, I get a pass from my husband. I get to have it at the table and face up because there could be a tweet, anything I want to monitor at that moment, and we just have to not take it personally.”

It wasn’t all politics. Ruhle took a moment to talk about the city being celebrated by Variety. “My favorite part about living in New York is you’re never alone,” the news anchor said. “You can be completely anonymous, you can eat alone, you can walk alone, you can shop alone, and you never feel alone. This city is your neighbor, this city is your family.”

Guests stayed at the party past 10 p.m., and as “CBS This Morning” anchor and honoree John Dickerson pointed out, “It’s past my bedtime, of course!”