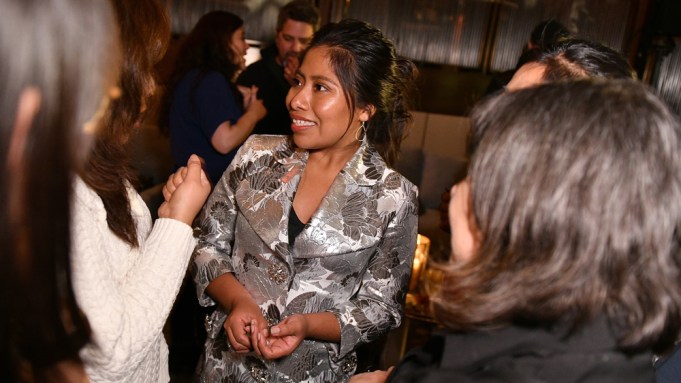 “Roma’s” highly acclaimed whirlwind tour took another stop in New York City on Tuesday night for a special screening for a star-studded crowd.

Producer Gabriela Rodriguez smiled as she told Variety about the affair, “I am just really excited. The feedback we have been getting has been so nice. We have had an amazing festival run with wonderful reactions from around the planet from Tokyo to Turkey to Latin America and different cities in Europe.”

“This whole adventure started without knowing anything. And it suddenly turned into all this,” García said as she pointed to the crowded theater. “All because of Alfonso.”

After the screening, audiences braved the chilly air and headed to hotspot The Pool for an exclusive after-party.

Aparicio beamed brightly as she entered and lit up the space in a sparkling silver ensemble. A jam-packed VIP table awaited her as guests, including Cuba Gooding Jr., Joshua Malina, and Dean Winters, mingled over mezcal margaritas and filet mignon.

“It has been a year of many things for me. I am very happy,” Aparicio told Variety. “The most important thing in the end is that people will get to see a beautiful film.”

Rodriguez gushed, “It is poetry that Alfonso has created. He pushes it all to make great art.”

“Roma” will be released globally on Netflix on Dec. 14.