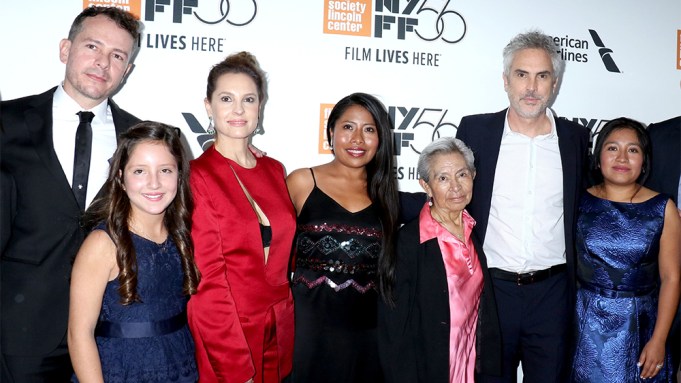 The audience at the New York Film Festival rose to their feet on Friday night for a roaring two-minute standing ovation honoring director Alfonso Cuarón’s  “Roma.”

The black-and-white Spanish language film is buzzing to be the helmer’s next big Oscar triumph. Considered his most personal project to date, the screenplay is a captivating love letter to the domestic worker who helped raise him.

“I am always happy to be at the New York Film Festival,” said the director before introducing the real-life inspiration behind his main character to the audience. “It’s a festival that really celebrates cinema for what it is meant to be.”

Set in the middle-class neighborhood of Roma in Mexico City, it’s the story of a domestic worker who helps raise the children of a family on the verge of divorce. The story of everyday life makes for heartbreaking poetry in this vast cinematic experience.

Cuarón insisted “Roma” is not a political film, even as it comes as tensions continue between the U.S. and Mexico.

“If it can help as a tool for [improving relations between the two countries], I would be happy, but the intent of making this film was not for that purpose,” he said.

The story, he said, is universal. “The human experience is one in the same wherever you are,” Cuarón said. “Borders should be a celebration of the different colors that humanity is made of. It should not be about divisions.”

Leading actress and newcomer Yalitza Aparicio, speaking through an interpreter, said she thinks the film could break down barriers between the U.S. and Mexico.

“That is my hope. That through the film people will be able to reconsider judging other people just because of the color of their skin and their education,” she said. “There are so many social factors. These are not important things. It is really about hearts and feelings of people that matter most.”

“Roma” is in theaters on Dec. 14 before being streamed on Netflix.