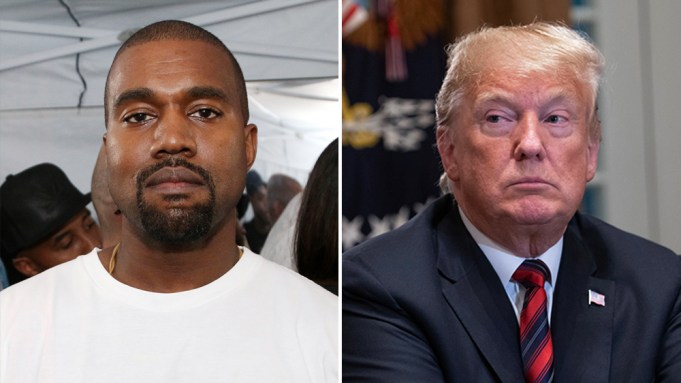 Kanye West may have said he’s distancing himself from politics, but that doesn’t mean he’s no longer in contact with the White House.

“When he doesn’t agree with something like that fire comment he will screengrab [and] he will send it to the people close to [Trump] and say that maybe there should be a little more empathy in this,” Kardashian West said before her panel with CNN’s Van Jones at Variety and Rolling Stone’s Criminal Justice Reform Summit at the Jeremy West Hollywood hotel.

Just last month, West announced that he was distancing himself from politics following a storm of backlash after he praised President Trump in a series of tweets. “My eyes are now wide open and (I) now realize I’ve been used to spread messages I don’t believe in,” the rapper wrote. “I am distancing myself from politics and completely focusing on being creative!!!”

After evacuating her home, Kardashian West posted on Instagram, writing, “Pray for Calabasas, Just landed back home and had 1 hour to pack up & evacuate our home. I pray everyone is safe.” She later tweeted an update explaining that although the flames had reached her property, they had since become more contained.”

Kardashian West told Variety that with just an hour to evacuate, they grabbed their computers and a hard drive containing digital files of their photo albums and videos as well as “my kids’ blankets, my childhood blanket that my grandma made me, things that you can’t really replace.”

“All the other stuff doesn’t really matter,” she added.

While evacuation orders have slowly been lifted, Kardashian West said they haven’t returned home just yet. “It’s smoky and my son has a little bit of asthma so it’s not really safe for him to go back,” she explained.

I heard the flames have hit our property at our home in Hidden Hills but now are more contained and have stopped at the moment. It doesn’t seems like it is getting worse right now, I just pray the winds are in our favor. God is good. I’m just praying everyone is safe 🙏🏼

Kanye West also tweeted about the fires, offering his support to those who lost their homes and praising firefighters and first responders for risking their lives while trying to help.

My sincere condolences to everyone suffering from the loss of their homes, loved ones and the unknown certainty of how much damage the fires will have caused.

In light of these situations, I am so inspired by the firefighters and first responders who are risking their lives to do whatever they can to help. They are our true heroes.

May God Bless us all