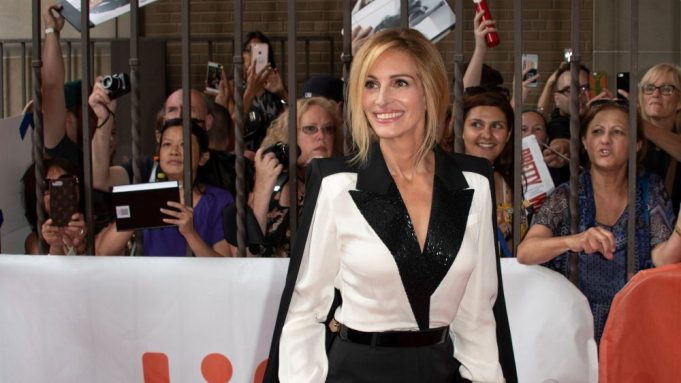 It was just two weeks ago when Julia Roberts posted a photo of herself on Instagram wearing a t-shirt emblazoned with “We Are Family.”

Sales of the shirt from Be Love Apparel benefit Together Rising, an organization working to reunite families separated during the recent immigrant crisis at the U.S.-Mexico border.

Family separation is “something that I’m just sick over,” Roberts told Variety at the Toronto International Film Festival premiere of her new Amazon series “Homecoming.”

She’s committed to doing what she can to bring attention to the issue. “There are so many terrible things that happen every day, so much that this atrocity shockingly could become a second page story when it should be the first page every day,” Roberts said. “So, every little bit to keep it in the forefront I’m all for.”

Let’s stand for families!! I’m so inspired by the work my friends at @beloveapparel are doing with their “positive impact “ #wearefamily campaign. Be Love has designed this beautiful shirt to stand in solidarity, keep awareness levels high and raise funds to help continue the fight to reunite these families . This situation in which families have been separated at the US border is a human rights crisis and is far from resolved. As of now, 572 children have not been reunited. Approx. 400 parents have been deported without their children. PLEASE go to www.beloveapparel.com (link in bio) to buy a shirt and jump on board this meaningful campaign. ALL profits are being donated to @together.rising , an amazing non-profit organization deeply involved in healing this crisis. Let’s make a difference together!! #beloveforfamilies #wearefamily #familiesbelongtogether

Roberts hasn’t been shy about her politics. In 2016, she was an outspoken supporter of Hillary Clinton’s bid for the White House. The Oscar winner insists she’s not worried about the future of the U.S. “I’m not,” she said. “I can’t be. I have three young children. I refuse to be scared.”

Meanwhile, Roberts was joined at the “Homecoming” premiere by the show’s creator Sam Esmail and costars Stephan James, Sissy Spacek, Dermot Mulroney and Jeremy Allen White. In the show — a psychological thriller based on a podcast of the same name — Roberts stars as a former caseworker at a secret government agency that helped soldiers rejoin civilian life.

“Julia f**king Roberts! Are you kidding?” Esmail said of landing the actress for her first regular television series gig. “It’s surreal. I heard she was a fan of the podcast. I told my agents I gotta talk to her. We Facetimed…two weeks before my wedding. I was so nervous but the minute we started talking it was like we were old friends.”

Roberts seconds that: “I don’t think I’ve ever made friends with someone faster than Sam Esmail.”