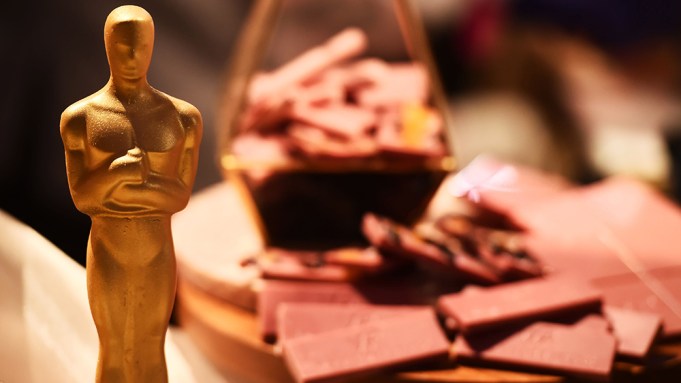 Ahead of her 29th consecutive year producing the Governors Ball, Cheryl Cecchetto reflected on the year the post-Oscars party was hit with some last-minute hiccups.

Cecchetto said the first year she put together the after-party, the décor included orange curtains. She thought to add goldfish hovering in tanks hung above the tables. “But about 50 minutes before the ball began, the koi started jumping,” she recalled. “So I had to remove all of the koi 20 minutes before everyone entered. It was a Cinderella story; the koi didn’t make it to the ball.”

Cecchetto also mentioned another unexpected moment that happened when they lost power for 11 minutes in the building. “The orchestra kept playing, Wolfgang [Puck] kept serving, the emergency lights came on, so it was perfectly fine.”

Puck created new pastries for guests to taste following the 90th awards ceremony, but this year’s display will also pay tribute to the past. As the caterer of the ball for the past 24 years, Puck left some favorites on the menu like the golden chocolate Oscars — executive pastry chef Garry Larduinat said about 6,000 were made for the event.

Larduinat said the desserts this year will have unexpected elements and flavors such as the key lime pie-filled chocolate bon bons and cocktail-flavored macaroons. He said, “(We) don’t want it to be too basic, too simple. But if you do make it, you want to make it interesting.”

In honor of the 90th Academy Awards, the theme of this year’s Governors Ball is the history of the Academy.

Lois Burwell, the Academy’s governor and awards and events committee chair, said the theme will be reflected through artifacts from past films displayed in the Ray Dolby Ballroom. The items will represent everyone involved in the filmmaking process, from the cinematographers to the production designers. A few of the items were enclosed in tall, glass coffee tables.

“Some of them have been given by fellow governors like Richard Edlund (from the visual effects branch),” Burwell said. “He has a collection of cameras so he’s lent us some of his things.” She added that Kathryn L. Blondell, a governor from the hairstylist and makeup branch, put together a wig to recreate Audrey Hepburn’s hairstyle from “Breakfast at Tiffany’s.”

The 90th Academy Awards will air live on ABC on March 4.