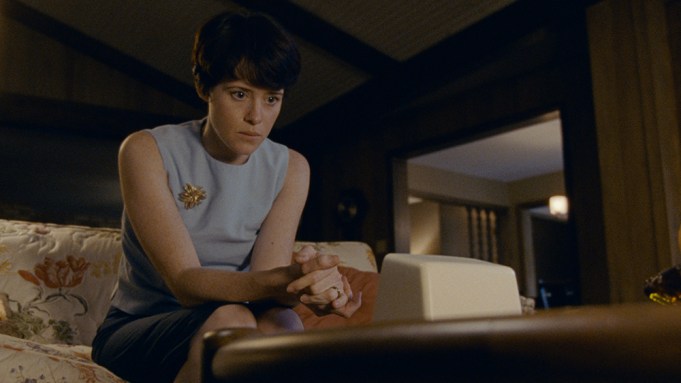 “This is a big movie,” writer-director Tony Gilroy told a crowd gathered for a screening of “First Man” on Wednesday night at New York’s Whitby Hotel. “Whether you end up loving or hating this film, you’re going to want a drink after.”

The 2-hour 21-minute opus, starring Ryan Gosling as Neil Armstrong, chronicles NASA’s journey to the moon and the myriad hurdles — both emotional and technical — encountered before the successful landing on July 20, 1969. “This film is both intimate and grand, and it’s too bad that you don’t have seat belts, because its very intense,” Gilroy added before the lights dimmed.

Due out on Oct. 12, Gosling is supported in “First Man” by Claire Foy as Neil’s wife of 38 years, Janet Armstrong. The role is a stark about-face from her turn as Queen Elizabeth II in Netflix’s “The Crown,” making it a clear bid for Oscar gold.

“I think that might be one of my favorite movies…ever,” Ben Stiller told his seat mates, including his daughter Ella, as the credits rolled.

Guests then carried on to the nearby Monkey Bar where the eatery’s signature bites and plentiful martinis circled the room, and the Peggy Siegel-curated group of screen fixtures mixed with Academy voters and a selection of key members of the “First Man” team. Among them, Foy, director Damien Chazelle, and screenwriter Josh Singer.

“What everybody now knows is that this guy is a seminal filmmaker,” Singer told Variety of Chazelle. “There’s nobody really doing what he’s doing right now, and whatever mission he’s on, I want to be on too. He had this idea of how to make this story visceral and convey how hard this really was, and what we found is that there was all sorts of loss and failure along the way. I was struck by [the astronaut’s] ability to take on challenges and the willingness to sacrifice, which we as a nation and a civilization don’t necessarily have today.”

The film is indeed done in Chazelle’s signature high-intensity style, first experienced in 2014’s “Whiplash” starring Miles Teller, but with its $60 million budget, the pressured moments were rendered in the form of rattling, larger-than-life space craft, rather than a pulsing, perspiring symbol. “First Man” also comes chock-full of unflinching accuracy, not only when it came to the NASA-approved terminology, but also Armstrong’s personal life thanks to first-hand input from the Armstrong family themselves.

“I think Dad has been mischaracterized over the years, because he’s been called reclusive and all kinds of things, which just aren’t true,” Armstrong’s youngest son, Mark, told Variety as he sat with friends in a corner banquette surveying the crowd. “He was a quiet guy, but he had a great sense of humor. He was social, and interesting, and fun-loving, and played with his kids, and I think you see that in the film.”

Mark also emphasized who how “heroic” the astronauts’ wives were.

“They had all of the worry and none of the control,” he said. “They had to run the household, raise the kids, and pay the bills, all while their husbands were away. My mother was an independent, strong woman, but so were a lot of the wives, and they gave up a lot to make these missions a success. I was six years old during the Apollo 11 mission, and I remember things like our family meeting in the dining room and I’m just really pleased that the filmmakers cared enough to do all of this in a way that’s authentic and frankly wanted to get me more involved. I really felt like the more that I put into the movie, the more I saw my input being well-received  and incorporated into the film. It’s just a good feeling.”