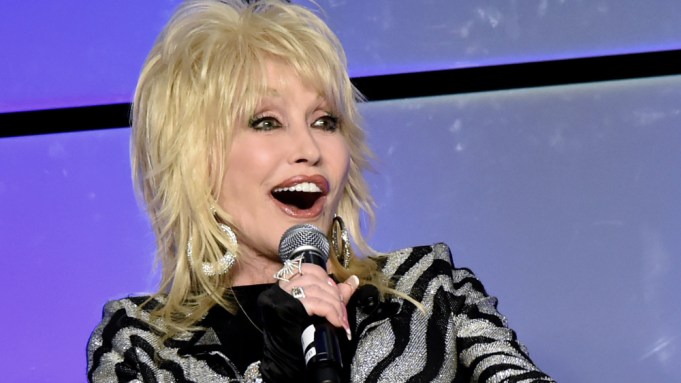 Dolly Parton is on the campaign trail.

But it’s not for the midterms.

The country music legend was in Los Angeles on Monday morning to promote Netflix’s upcoming movie “Dumplin.'” She performed “Girl in the Movies,” an original song she wrote and recorded for the film, for a ballroom full of journalists at the Four Seasons in Beverly Hills.

“We’re just happy to be here because we’re actually out politicking trying to get our song heard and maybe get nominated for an award on those Oscars and all that stuff,” she said before performing the track with her producer Linda Perry on guitar. “We’re really, really proud of this.”

“Dumplin'” is based on Julie Murphy‘s 2015 best-selling YA novel of the same name about the plus-size daughter (“Patti Cake$’s” Danielle Macdonald) of a former beauty pageant queen (Jennifer Aniston), who signs up to compete in a pageant. The daughter is a Parton fanatic and many of her hit songs are played throughout the movie.

Parton and Perry originally teamed up to write just one song. “Songs just kept coming out of us one night after the others,” Parton said. “I just absolutely loved [Perry] and we just connected.”

They ended up recording six original tunes. “This was the first time I ever worked with a female producer,” Parton said.

Perry gushed, “I don’t think people understand the work ethic of Dolly. When we got together, six songs were written in a total of three days. … Then one day she came into my studio and sang six songs in one day.”