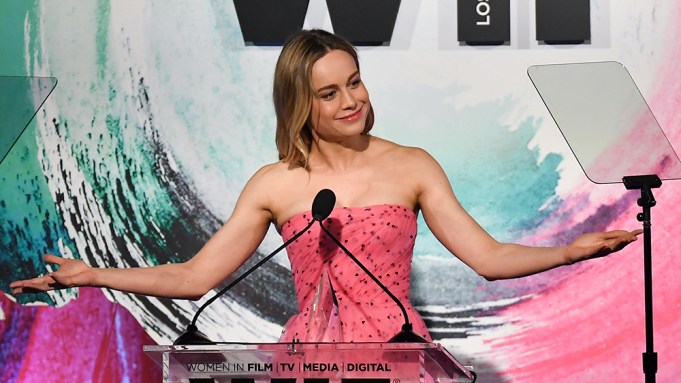 At the Crystal + Lucy Awards, the actress announced that the Sundance Film Festival and the Toronto Film Festival have pledged 20 percent of their press credentials to minorities to better reflect America.

Larson was on hand to accept the Crystal Award for Excellence in Film Wednesday night at the Beverly Hilton when she dedicated her speech discussing the recent “Critic’s Choice” study, published by USC Annenberg on Monday. Citing the study, Larson said, “Of the 100 highest-grossing movies in 2017, less than a quarter of the critics were white women, less than ten percent were underrepresented men, and only 2.5 percent were women of color.”

Larson emphasized the issue this presents for today’s industry, given that “reviews change lives” and impact the films that are considered for awards season. She also reiterated the importance in having an industry that truly reflects the communities we live in.

“Am I saying I hate white dudes?” the Oscar-winning actress asked repeatedly throughout her speech. “No, I’m not,” she answered.

“If you make a movie that is a love letter to women of color, there is a chance that a woman of color does not have access to review and critique your film,” she said, while revealing plans to roll out an opt-in program that will provide studios with access to underrepresented journalists and critics. “Do not say the talent is not there, because it is.”

Larson commended Women in Film for having diverse representations on the carpet at the ceremony, while challenging “decision-makers” in the room to make an effort to create a more inclusive industry both on and off-screen.

She concluded with a challenge to publicists and decision-makers in the room, encouraging them to revisit their press line and junket invites to ensure they are inclusive of underrepresented journalists. “Please make sure that these invites and credentials find their way to more underrepresented journalists and critics, many of whom are freelancers.”

Inclusivity was definitely the theme of the evening. Attendees and honorees stressed their dedication to creating spaces that are empowering for all women.

Madeline Di Nonno, CEO of the Geena Davis Institute on Gender in Media, challenged Hollywood’s inclusion of women beyond race and gender-identification. “But what about people with disabilities? It’s really about intersectionality,” she said. “When people think about diversity and inclusion, they forget gender and they forget that people can be a little bit of everything.”

Kimberly Peirce, filmmaker and honoree as part of the 45 years of Advocacy Celebration, said “I won’t just talk about women. It’s important that we have equal representation and we have equal opportunity and fairness for women and people or color, and anyone who is not fairly represented.”

Channing Dungey, president of ABC Entertainment Group, echoed this sentiment, while loosely addressing the “Roseanne” controversy. “When we see things around us that counter our beliefs, our actions must match our words,” she said, followed by a large round of applause from the crowd.

Dungey, who received the Lucy Award for Excellence in Television from “Grey’s Anatomy’s” Ellen Pompeo,” had a simple tip for the women in the room: “We have to act with purpose and determination.”

She concluded: “Like the great Michelle Obama said, ‘When they go low, we go high.”

Actress Alexandra Shipp received the Women in Film Max Mara Face of the Future Award from “Girls Trip” star Regina Hall, who described how refreshing it is to see new talent. “Our young girls, they move us forward in ways that we wouldn’t be able to do,” she said. “Although there’s ways that we pave, there’s also trails that you girls blaze in your own right. All of that has to be celebrated.”