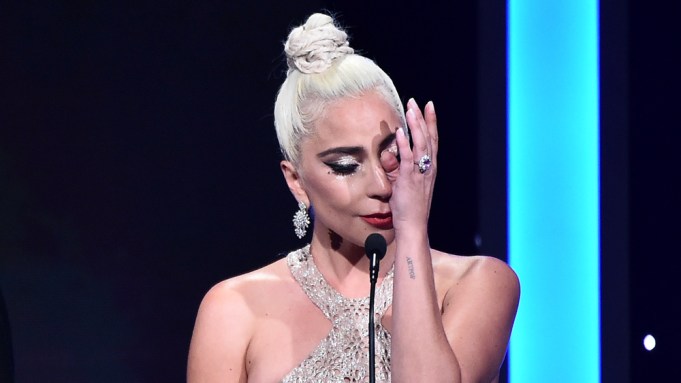 Bradley Cooper’s friends and colleagues gathered at the Beverly Hilton on Thursday night to salute his career as he was presented with the American Cinematheque Award.

“When we do these Q&As and things together, sometimes you call me Gaga, but we both know that you call me Stefani,” Cooper’s “A Star Is Born” co-star Lady Gaga said, fighting back tears. “I ran from Stefani for a long time, and I put on a superhero cape and called myself Lady Gaga. He challenged me to deep dive into a place where I had to see her again. Where I had to be Stefani again.”

“There’s really only one human being on the planet who you remind me of, and that’s Tony Bennett,” she said. “And to me, that man is a legend.”

“I have never seen somebody work so hard as I saw you work on this film. You have worked for years on this film and you all have the privilege of watching the movie, but I wish that you had the privilege that I had.”

Joining Lady Gaga on stage was fellow “Star Is Born” actor, Sam Elliott, who tipped his hat to Cooper for bringing him on board for the movie.

“Bradley wrote, directed, played a guitar, became a rock star, produced, brought all the players together, brought all the people together behind the camera, convinced Warner Bros. to make the film,” Elliott said. “I don’t know anybody in this business that can do something like that.”

Elliott also thanked Cooper for the introduction to a certain once-in-a-generation pop star. “That’s another thing you did for me, pal,” Elliott said with Lady Gaga beside him on stage, “I didn’t think there was ever any chance that I was going to cross paths with Lady Gaga.”

The range of Cooper’s work was on full display as video tributes were played throughout the evening and introduced by those who know him best. From Jennifer Garner, who has been a friend since he first arrived in Hollywood, and David O. Russell, who directed Cooper in three films (“Silver Linings Playbook,” “American Hustle,” and “Joy”), to Brian Klugman, writer and director of “The Words,” and Taya Kyle, the widow of Chris Kyle, whom Cooper portrayed in “American Sniper,” all acknowledging the gifts and impact of the actor and director.

Vince Vaughn recalled his introduction to Cooper in one of his early roles.

“I first met Bradley on the set of ‘Wedding Crashers’ where he was the formidable antagonist Sack Lodge,” Vaughn said. “He had an interesting combination of worldliness, class, combined with the real threat of brutality and violence. It made him captivating to watch and interesting to shoot a scene that was supposed to be football, but he decided to wear a rugby uniform, which should have been a clue to me to the commitment of method he would bring that day.”

Ed Helms and Zach Galifianakis, Cooper’s co-stars from the “Hangover” franchise, took the stage and gave him the treatment as only they could.

“What is the key to Bradley’s success? He works with incredibly talented people,” Galifianakis quipped. “There was more to it, but I guess that’s it.”

“Between filming ‘Hangover 1’ and ‘2,’ we got to see the true artist in Bradley, he did ‘The A-Team,’” Galifianakis added.

Between jokes, Helms took a moment to recognize the talents of his friend, “It’s not because you’re an incredibly talented guy. Which you are. And it’s not because you work your ass off. Which you do. It’s because in your acting and in your directing, there is some part of your truth as who you are that emerges and I think that people see and connect to your gigantic heart and your grand benevolent spirit.”

“It’s why as a friend of your’s who has been through thick and thin with you,” Helms added. “It’s why I’m so unbelievably proud of you, not only for this award and recognition, but for all that it represents in the body of work that you’re building. Keep killing it.”

To that Galifianakis heaped on, “I thought we were just gonna do jokes. When we were filming ‘Hangover 3’ all Bradley talked about was which mobile plan was best to phone in his performance.”

The show concluded with Sean Penn presenting Cooper with the award, to which he thanked all those who took part in the night and his focus moving forward in his career.

“Tonight is a reminder to me that the collaboration of art is what I strive to be a part of and that’s where I feel the most alive,” Cooper said. “Tonight you have given me so more much inspiration to keep going and telling stories.”

“More important than that, it reminds me to do anything I can to help a young dreamer fulfill that dream and be a part of this community. So thank you very much.”