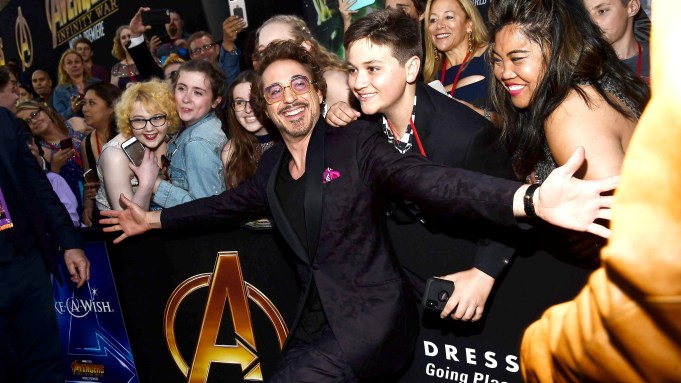 The largest contingent of Marvel superheroes assembled Monday night in Hollywood for the world premiere of “Avengers: Infinity War,” coming together to celebrate the studio’s most ambitious film to date.

Chadwick Boseman, fresh off “Black Panther,” Avengers stalwarts, Robert Downey Jr., Scarlett Johansson and Mark Ruffalo, and newer Marvel entrants Tom Holland and Evangeline Lilly, who will portray the Wasp in this summer’s “Ant-Man and the Wasp,” were among the superheroes in attendance.

The long list of stars who walked the carpet to meet fans, catch up with fellow cast members and answer questions from reporters delayed the start of the screening by nearly an hour, but no one seemed to mind.

The premiere was among Disney’s most heavily-guarded and secured event in recent memory, with a large perimeter surrounding Hollywood Boulevard, which was closed in front of the Hollywood and Highland center. Attendees were able to see the film was on three different screens, including one in the Dolby Theater.

The purple carpet stretched almost the entire block and featured costumes and other memorabilia from the Marvel Cinematic Universe. Fans also did their best cosplays, coming dressed up like Super-Man, Dr. Strange and Black Widow, among others.

Ten years in the making, the 2-hour-40-minute feature brings together almost all of the characters introduced in the Marvel Cinematic Universe. The Avengers and their allies team up to try to defeat Thanos (Josh Brolin) from his reign of devastation that threatens the entire universe.

Plot details were kept under tight wraps, with stars and writers careful not to reveal any spoilers. “Avengers: Infinity War” writers Christopher Markus and Stephen McFeely said they only followed the natural progression of the story.

Brolin also failed to divulge who Thanos may have killed. “Maybe them all. Maybe this is it,” he said, adding that Thanos “the biggest, baddest most overwhelming character that they’ve had yet.”

Monday’s premiere was as much a celebration of “Infinity War,” as it was for a big milestone for Marvel Studios, which first released “Iron Man” a decade ago. The Downey Jr. starring “Iron Man”  kicked off the expansive and ever-growing Marvel Cinematic Universe that now includes a number of new fan favorites, like Black Panther, Dr. Strange and the motley Guardians of the Galaxy crew.

Downey Jr. seemed to be channeling his Marvel character, Tony Stark, during a brief speech before the screening inside the Dolby Theater.  As he described how “Iron Man” laid down the foundation for the expanding MCU, he attempted humility before deadpanning, “Screw it, you’re welcome.”

“Infinity: War,” he said, was a team effort of all the Avengers and their allies. “We’re all competing for each other for you,” he said.