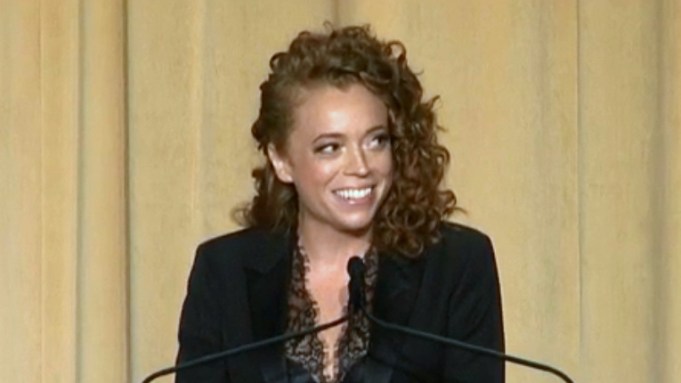 WASHINGTON — This year’s White House Correspondents’ Association dinner was more subdued than in years past, but stirring in its own way for its demonstration of media solidarity in the face of presidential push-back.

Michelle Wolf, soon-to-be host of her own weekly Netflix series, was the featured entertainer, but she was a contrast to previous talent in that she isn’t known as a purely political humorist. Netflix even debuted a new promo for the show, called “The Break.” Prior to the dinner, she told CBS News it was “cowardly” of Trump not to attend.

After a Stephen Colbert satiric cartoon, Margaret Talev, president of the WHCA, welcomed the attendees, and paid respect to President George H.W. Bush. The next attraction was a video of Paul Ryan that started out light-hearted, but ended with a message of support for the press. “What you do – it really matters. Journalism can not just inform but empower citizens. It’s part of the genius of the country – cheers to the first amendment.”

When Michelle Wolf’s speech started, she immediately struck a raunchy tone that she stuck with throughout.

“Trump isn’t here. I would drag him here myself, but it turns out the president of the United States is the one p–sy you’re not allowed to drag,” she continued.

“Trump wants to give teachers guns, which I support, because they can sell them to buy supplies.”

“You guys have gone through cabinet members faster than Starbucks throws out black people,” Wolf said.

During the Obama years, the event itself was a surreal mix of Hollywood celebrity and cabinet members. That started to change last year, when Trump, who had referred to the “fake news media” as the “enemy of the American people,” decided to break with tradition and skip the dinner. Instead, he appeared at a rally.

He did the same this year — appearing in Michigan — but let it be known that other members of his administration were welcome to attend the dinner and the fetes leading up to it.

They did. Press Secretary Sarah Huckabee Sanders appeared at the head table of the Washington Hilton.

Among the other Trump administration officials at the dinner were Secretary of Commerce Wilbur Ross, Deputy Attorney General Rod Rosenstein and antitrust chief Makan Delrahim, well as FCC commissioners Brendan Carr and Michael O’Rielly.
A number of former administration officials were present. Sean Spicer posed for pictures with his successor, Sanders, at the CBS News Atlantic Media reception, and others there included former chief of staff Reince Priebus and Omarosa.

White House counselor Kellyanne Conway posed for an endless stream of pictures with guests at UTA’s party on Friday night at Fiola Mare in Georgetown and on Saturday at an annual Garden Brunch to support the families of military veterans.

Also spotted: Spicer at a Capital File party at the Kreeger Museum on Friday, and former communications director Anthony Scaramucci at the UTA event.

Among those from showbiz who turned out at the weekend was Kathy Griffin, a guest of the Washington Blade; and Richard Schiff, who was with the Creative Coalition contingent, along with Tim Daly. That was quite a contrast to the dinners during the Obama years, when it seemed like much of the industry had descended on D.C.

The purpose of the dinner is to raise money for student scholarships, and to hand out journalism awards. Among this year’s winners were Maggie Haberman of The New York Times; Evan Perez, Jim Sciutto, Jake Tapper and Carl Bernstein of CNN; Josh Dawsey of Politico (and now of the Washington Post); and Jason Szep, Peter Eisler, Tim Reid, Lisa Girion, Grant Smith and team from Reuters.