Van Jones on Whether Kim Kardashian Would Ever Run for President 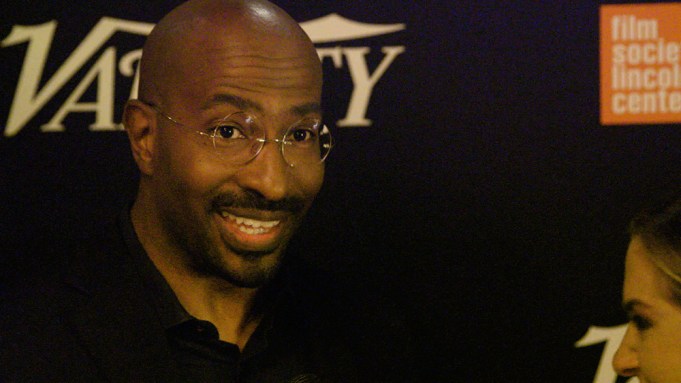 Van Jones has visited the White House with Kim Kardashian West to discuss prison reform efforts, but does the CNN host and commentator believe Kardashian West has political ambitions of her own?

When asked who should run for president in 2020, Jones told Variety, “Kim Kardashian.”

With a laugh, Jones clarified that the “Keeping Up With the Kardashians” star would not want to run for office, saying, “No, she wouldn’t want to do it…I always tease her about it.”

Kardashian West penned Jones’ tribute in this week’s issue of Variety, in which he was named one of the 50 honorees to make this year’s New Power of New York list. The reality star and beauty mogul wrote that Jones is “the hope that so many people need,” calling him a mentor of hers. This September, the duo traveled to Washington D.C. to speak to the President about pardoning a wrongfully convicted prisoner, Chris Young, following their successful effort in helping to free inmate Alice Marie Johnson in May of this year.

Speaking at Variety‘s annual New York party on Wednesday night at Atlantic Grill in Midtown Manhattan, Jones raved about his social justice work with Kardashian West, saying, “During the Obama years, people just loved to go to the While House. It was like Hollywood east. You’d go there and see every star in the world. You don’t see that many people who are celebrities who are willing to go, but Kim Kardashian was willing to go, and she is smart and tough and cares.”

Jones added of Kardashian West, who is married to rapper Kanye West, “I think people forget, she’s not like a little teeny bopper socialite anymore; she’s a mom of three kids — frankly, three African-American kids — and that changes your perspective when you’re raising little kids of color in this world. And man, she is effective and tough-as-nails and smart.”

As for who Jones thinks should run for president in 2020? The broadcaster says he “absolutely” thinks he will see a female president in his lifetime, and mentioned Kamala Harris, Tulsi Gabbard, Elizabeth Warren, Kirsten Gillibrand, and Amy Klobuchar.

“The democrats have an embarrassment of riches when it comes to so many qualified women, so it’s literally just a matter of time,” Jones said.

“I think the Clinton’s time has come and gone, but if she wants to throw her hat in the ring, who knows,” Jones said when asked if Hillary Clinton should consider running again in 2020. “I think we need some new faces up there, but if it were Hillary versus Trump, I would be out there fighting for her like I did last time.”

“It was completely inappropriate, and more importantly…he has no credibility on either side of the issue. Now he says, he wants to stick up for men who are being falsely accused — well, hold on a second. When the Central Park Five were accused of doing bad things, he wanted them executed. He didn’t give a damn about them. He didn’t care about due process then,” Jones said. “So he has no credibility there, and he also clearly is not going to be a defender of women’s rights. So he’s not a defender of women’s rights, he’s not a defender of due process. It’s sad that he can’t lead on either side of it authentically, and I think that he should just be quiet and let the process go forward.”

“I thought she was incredible,” Jones elaborated, speaking of Ford. “I’ve never seen a more credible human being at lunch or just in the store or just at church — to be in front of 100 million people and speak the way she did, you have to believe that she’s telling the truth. Meryl Streep couldn’t have acted that well. Something happened to her and she should be respected.”