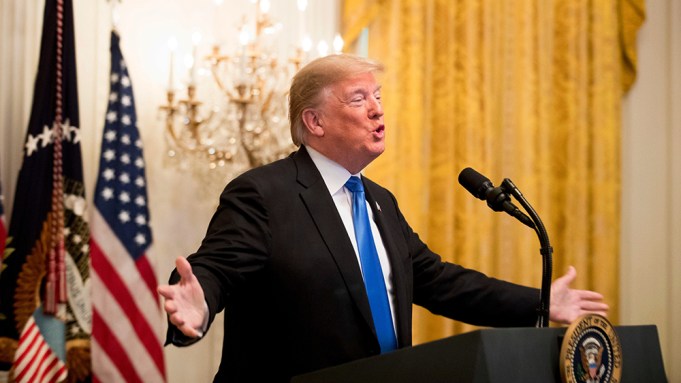 WASHINGTON — President Donald Trump praised law enforcement for the arrest of a suspect in connection with the sending of at least a dozen mail bombs to CNN, top Democrats, and other officials.

“These terrorizing acts are despicable and have no place in our country,” Trump said, just a few hours after characterizing the suspected mail bombs as the “bomb” stuff.

Trump was speaking at the White House to a young black leadership summit. They cheered as Trump announced the arrest.

“We will prosecute them, him, her, whoever it may be, to the fullest extent of the law,” Trump said.

It is still unclear if authorities believe that others were allowed.

Trump also returned to calls for unity and decrying political violence, saying that “we must not allow” it to “take root in America.”

“I am committed to stopping it now,” he said.

“Americans must unify, and we must show the world that we are united together in peace and love and harmony as fellow American citizens,” Trump said.

As the story began to unfold on Wednesday, Trump also called for unity, but he later blamed the media for stoking a caustic political environment. He made no such remarks on Friday. But just a couple of hours earlier, he sent out a tweet that lamented that the story was distracting from the midterms.

He wrote, “Republicans are doing so well in early voting, and at the polls, and now this ‘Bomb’ stuff happens and the momentum greatly slows – news not talking politics. Very unfortunate, what is going on. Republicans, go out and vote!”

Later at the White House event, members of the crowd shouted “George Soros” and “Lock em up.” Soros was one of the intended recipients of the suspected mail bomb packages.